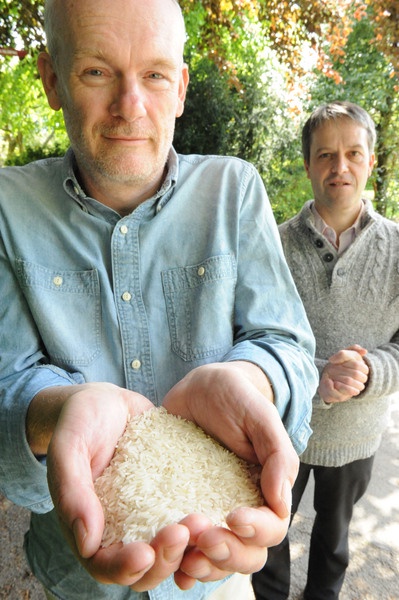 DNA techniques are being used to analyse genes in rice in pioneering research which aims to develop a new variety of the grain with greater health benefits.

Rice is relied upon as a sustenance food by half of the world’s population.

University of Aberdeen scientists are leading the rice study which is also investigating how to reduce the amount of water required in rice production, to make the grain a more sustainable food option for the future.

Experts behind the four-year project – which is funded by a £1.2M grant from the Biotechnology and Biological Sciences Research Council (BBSRC) – say they hope their work could improve of the lives of millions worldwide, by putting better quality rice in the mouths of more people.

Professor Andrew Meharg, a biogeochemist at the University of Aberdeen, and one of the leads on the study which involves collaborators from Lancaster, Bangladesh, India and the Philippines, said: “We will be employing one of the most pioneering developments in plant science - genome sequencing of plants.

“In fact we will be using the very same equipment and chemistry that is used to sequence genes in the human body, to analyse genes within rice.

“Our work is focused on Bangladesh, where rice accounts for 70% of the population’s calorific intake. We plan to sequence the genes of 300 varieties of rice from the country and surrounding Indian states.

“What we will be looking for are markers in each of those individual rice types which can be associated with a positive trait we wish to measure.

“For example those that can be attributed to providing a greater yield of the crop or higher levels of zinc. One important trait we will focus on is lower levels of grain arsenic. Arsenic, which is a poison to humans, is taken up by the crop from ground water during the growth process and can sometimes occur at high levels in rice.

“If we can identify the genes responsible in rice for these positive traits then we can improve crops more rapidly and accurately and ultimately develop a new type of rice which has greater benefits for the world’s population.”

The study will also test a technique developed by the International Rice Research Institute (IRRI), which aims to reduce the amount of water currently required in the process of rice production.

Dr Adam Price, from the University of Aberdeen’s School of Biological Sciences, explained: “Rice is relied upon as a staple part of the majority of the world’s diet, yet the process involved in growing this crop is accountable for a massive drain on the world’s water resources.

“A mammoth 2500 litres amount of water is required to produce just 1kg of rice.

“We will be testing a technique developed by IRRI called alternative wetting and drying where the crop is flooded and then dried out for 10 to 15 days.

“Our focus will be to analyse the major benefits we believe to be aligned with this technique, to assess whether it provides the answer to making rice production a more sustainable option in the future.

“The first of those benefits is the potentially large reduction in water usage and analysis of this will be a main focus for the study. As a positive offshoot, using less water means that there is less opportunity for arsenic to enter the rice grain from the ground water, leading to lower levels of arsenic contamination.

“Initial studies have also shown that the technique enhances yield and increases the levels of nutrients contained in the grains – specifically zinc and iron.

“This is of particular significance given that increasing these nutrients in our diets is one of the United Nation’s top ten actions that humans can do to reduce suffering.”

Professor Meharg added: “Our team consists of scientists from the fields of maths, biogeochemistry, plant physiology, plant genomics and systems biology, and our collaborators span the globe.

“It would be fair to say that this is one of the first occasions that scientists from such a broad range of areas have come together to address the challenge of sustainable rice production in this way.

“If we achieve the outcomes we believe are possible from this project, the result could essentially be a significant improvement in the health and well-being of people across the world by putting better quality rice in the mouths of more people.”