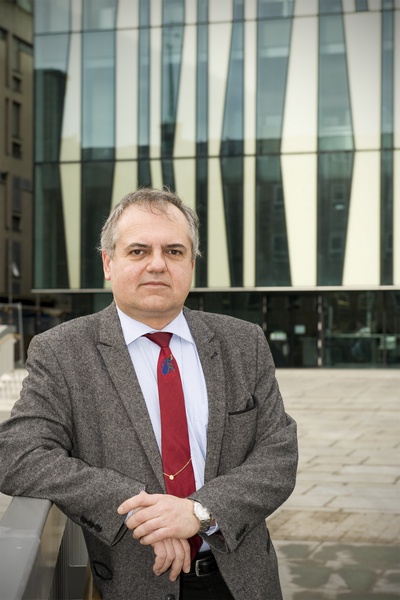 Technology to empower people who have impaired speech and mobility as a consequence of illness or a stroke to live independently has been developed by University of Aberdeen scientists, and was presented today at the British Science Festival 2012.

The software allows the user to assign simple gestures to actions they would like to be performed in their home – so for example a wave of the hand could action the curtains to open or a ‘thumbs up’ could switch the lights on in a particular room. Wireless communication technologies –such as Bluetooth – are used to link the software to devices in the home.

Computer Scientists at Technabling, a spin-out company at the University of Aberdeen, have developed the technology, which is a spin off from the Portable Sign Language Translator (PSLT), a device for sign language users to translate sign language into text, which is also being developed by Technabling.

The PSLT is the first of its kind in the world which can be used on portable devices and allows users to customise sign language to their own specific needs.

Dr Ernesto Compatangelo, Lecturer in Computing Science at the University of Aberdeen, and founder and Director of Technabling said: “For some people hand gestures are the only way of interacting with the environment around them because of speech impairments and reduced mobility, as a result of illness or an accident. In the same way as they can use sign language to communicate with others, they can now use hand gestures to control the environment.

“In devising the PSLT, we wanted to create software that enables independent living not only by addressing the individualised communication needs of-signers, but also their ambient control needs, Notably, we are achieving this result using affordable, off-the-shelf technologies.”

The person using PSLT signs into a standard camera integrated into a laptop, netbook, Smartphone or other portable device such as a tablet. Their signs are immediately translated into text which can be read by the person they are conversing with.

PSLT development is funded by the Small Business Research Initiative (SBRI) sponsored by the Department for Business Innovation and Skills (BIS) and the Technology Strategy Board (TSB) and managed by JISC TechDis, a leading UK advisory service on technology and inclusion.  It’s anticipated the technology could be available as a product next year.

Dr Compatangelo added: “One of the most innovative aspects of the PSLT is that it allows sign language users to actually develop their own signs for concepts and terms they need to have in their vocabulary – essentially any gesture can be assigned to any given word.

“It is this same theory which can be used to benefit those with limited mobility – so any gesture can be assigned to cause an action to happen to an appliance or device in their home.

For more information on the PSLT visit www.pslt.org.

Dr Ernesto Compatangelo is taking part in a press conference at the British Science Festival on Tuesday September 4 at 12noon.

He is available for interview to journalists not attending the Festival. To arrange, contact Kelly Potts/Jennifer Phillips on 07773358962/07776461470.

The British Science Association is the UK's nationwide, open membership organisation which provides opportunities for people of all ages to learn about, discuss and challenge the sciences and their implications. Established in 1831, the British Science Association organises major initiatives across the UK, including National Science & Engineering Week, the annual British Science Festival, programmes of regional and local events, and an extensive programme for young people in schools and colleges. The Association also organises specific activities for the science communication community in the UK through its Science in Society programme. For more information, please visit www.britishscienceassociation.org.