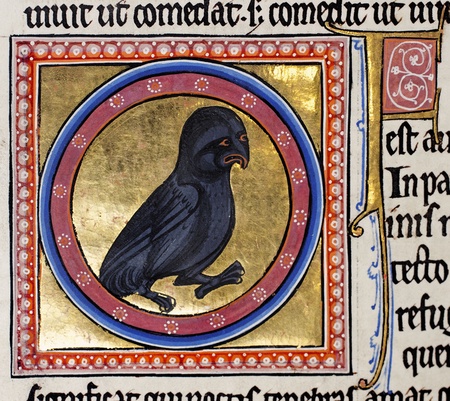 A lavishly illustrated medieval book which once belonged to King Henry VIII is to go on public display for the first time.

The Aberdeen Bestiary, created in England in around 1200 and first documented in the Royal Library at Westminster Palace in 1542, will be shown in a new exhibition Gilded Beasts at the University of Aberdeen, launched on Monday (June 25)

Bestiaries were illustrated books of animals, some real and some mythological, used to provide Christian moral messages. They were popular in the 12th and 13th centuries but few were as lavishly produced as the Aberdeen manuscript, which has been in the care of the University for almost four centuries.

Renowned for its exquisite illustrations and covered in gold leaf, it is one of the best preserved books of its kind still in existence and offers an unrivalled insight into medieval manuscript production methods.

While it is unclear whether the Bestiary was commissioned for a royal client or seized during King Henry’s reign from a dissolved monastic library, many clues regarding its creation have survived, hidden in the book’s margins for more than 800 years.

Professor Jane Geddes, academic advisor to the exhibition, said: “The Bestiary is like a medieval encyclopaedia and was written to appeal to the general public and to teach children how to read – it was specifically designed to draw you in and that appeal has stood the test of time. It is not about nature but about moral messages and there is a story behind each beautiful illustration.

“The Aberdeen Bestiary is one of the most lavish ever produced but it was never fully completed and so the edges of the pages were not finished and tidied up. This means that the tiny notes from those who created it still remain in the margins, revealing more to us about the method of production than most other surviving medieval books.

“The Aberdeen Bestiary is also extremely rare in having a ‘twin’, as it is widely believed to have been created in the same monastic scriptorium as the Ashmole Bestiary, held at the Bodleian Library in Oxford. By comparing the two we can access an unparalleled amount of information about how the scribes and artists actually worked.”

The Bestiary first came to Aberdeen in 1625 when it was bequeathed to the University’s Marischal College by Thomas Reid, a former regent of the College and the founder of the first public reference library in Scotland.

Reid, who served as Latin secretary to King James VI and I, is said to have been given the book by his friend Patrick Young, son of the Royal Librarian to the King.

Professor Ian Diamond, Principal and Vice-Chancellor of the University of Aberdeen, said the institution’s state-of-the-art Library and Special Collections Centre, which opened last year, provides for the first time a secure and environmentally suitable gallery in which to display the invaluable work.

“One of the aims of the new library is to preserve and showcase the University’s extensive special collections and archives. The Aberdeen Bestiary is the jewel in the crown and it is wonderful to be able to display it to the public for the first time in this way.”

The pages of the Bestiary on display will change throughout the exhibition, which runs until August 18. Gilded Beasts will also be accompanied by a programme of family events.

Siobhán Convery, Head of Special Collections at the University of Aberdeen, added: “The Aberdeen Bestiary is a remarkable resource which offers a fascinating insight into the medieval mindset

“We will be turning the pages of the original Bestiary each week so we hope people will return time and time again to discover something new.

“The Bestiary has also been fully digitised, translated and transcribed so it can also be enjoyed online.

Gilded Beasts will be open Tuesday to Friday 10am to 4pm and Saturday from 1pm-4pm.

To learn more about the Aberdeen Bestiary visit http://www.abdn.ac.uk/Bestiary/Bestiary.hti