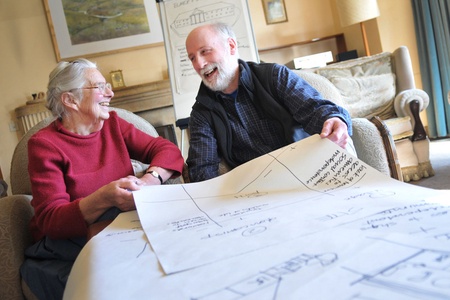 The Older People for Older People (O4O) projectlooked at the role of older people in rural life in Scotland, Sweden, Finland, Greenland, Dumfries and Galloway and Northern Ireland, and helped to devise community support schemes.

The project has won the RegioStars 2012 Award in the category ‘Inclusive Growth: Strategies, initiatives or projects addressing the challenge of demographic change and supporting active ageing”’  The RegioStars award recognises original and innovative projects which could be attractive and inspiring to other European regions.

O4O investigated ways to enable older people to live happily and healthily in their homes and communities, as well as making a strong contribution to community life.

"This award recognises the incredible contribution made by older people to their communities,” explained project coordinator Kate Stephen who accepted the award at a ceremony in Brussels this week. “The project has demonstrated that older people themselves are central in developing solutions to the challenges they face. I have been inspired by, and am very proud of their achievements which have improved the lives of many people in villages and rural areas in Europe’s Northern Periphery.”

O4O helped a community group to form and take over the running of a care centre for the elderly in Lochinver, Assynt, and engaged senior citizens in Ardersier, near Inverness, to make a film of their memories, among other initiatives in the Highlands.

Although the project is finished, the services developed by older people in the rural communities involved continue. The experiences and learning established during the project have been captured and presented in the O4O Toolkit - a 'manual' which will enable the start-up of O4O-type services in further communities throughout the Northern Periphery and beyond.

European Commissioner Johannes Hahn for Regional Policy stated about the winning project: "I am pleased to see a project illustrating the benefits of territorial cooperation recognized through the RegioStars awards. It shows that by combining efforts, EU regions can find concrete solutions to the common challenges they face.  Partners across Europe's northern periphery have worked closely together to develop new support systems and services for their older citizens living in rural areas. This is indeed an excellent example of the good use of EU investment."

RegioStars Awards is a competition to select the best among all regional development projects funded by the European Union. The aim of RegioStars, the Award for Innovative Projects, is to identify good practices in regional development and to highlight original and innovative projects that could be attractive and inspiring to other regions. This year, the European Commission received a record number of 107 applications.

The O4O project was designed in response to the increasing proportions of older people in Europe; especially peripheral regions such as the Northern Periphery which have a higher percentage of older people compared with central urban regions. The difficulties of providing services to older people in remote and rural areas and suggestions within policy that citizens can take a more active role in service design and delivery were the basis for the project idea.

The project empowered older people to identify their needs and supported them to develop a variety of social organisations that will provide the services to meet those needs. The innovative aspect is that the people providing the services to older people are older people themselves. The objective is to improve the quality of life for older people, so they can stay and live healthily and happily in their own homes for a longer period.

A video about the winning O4O project can be found on the RegioStars website, www.ec.europa.eu/regiostars. More details about the O4O project are available on their website, http://www.o4os.eu/.

The O4O project was part-financed by the European Regional Development Fund through the Northern Periphery Programme 2007-2013.

O4O was led by the Centre for Rural Health, a collaboration between the University of the Highlands and Islands and the University of Aberdeen in Scotland. Other partners in the project were located in Sweden, Finland, Greenland and Northern Ireland.