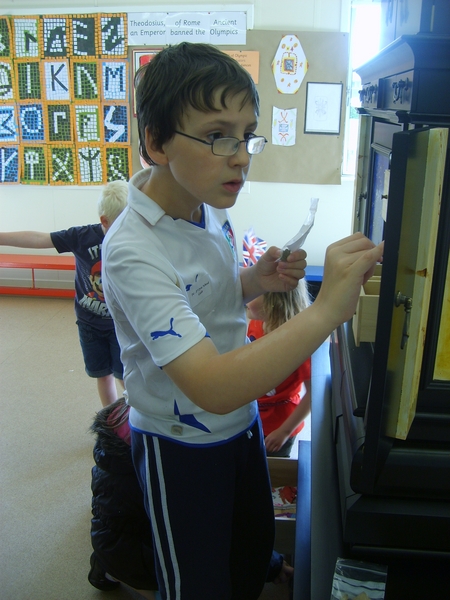 Pupils in Oyne and Keig Schools have been displaying the results of their own archaeological fieldwork as part of a University project to unlock the secret past of the Bennachie area.

Pupils in Oyne and Keig Schools in Aberdeenshire have been taking part in an archaeological project to find out more about life around Bennachie. They have been working with University staff and an archaeologist to explore the archaeology of the area around their schools.

The results of Oyne School’s archaeological work and documentary research were displayed as part of the village’s Jubilee celebrationson Saturday 2nd June. This included sherds of medieval pottery which were discovered by pupils, who have cleaned, labelled and prepared them for display.

Pupils in Keig School have discovered findings of 19th century pottery and a sherd of medieval pottery. They will be exhibiting their findings in Keig School on Thursday 7thJune from 5.30 to 8pm.

Both schools have used the University Museum’s ‘Cabinet of Curiosities’ as part of their exhibition of their findings. They started with a visit to the University’s King’s Museum where they explored the collections and found out about the history of museums and collecting.

Children have been displaying their finds and other treasures in the cabinet’s 70 drawers, display areas and secret compartments. They have also borrowed an object from the University’s collections to display in the cabinet alongside their own finds.

Colin Shepherd, the Bailies of Bennachie’s Archaeologist, said “I am amazed at how good the children are at being archaeologists and the research work they have carried out is first class.”

Elizabeth Curtis, Lecturer in Education, said “Using the Cabinet of Curiosities has helped pupils to think about ways of displaying their ideas to other people. They have also been able to use the museum collections to see what their broken sherds of pottery would originally have looked like.”

Mrs Jane Leghroumi, Head Teacher of Keig School said, “The pupils have found it very exciting to work as archaeologists and have learnt many new skills.  They will be very proud to display their finds and ideas to the community.”

This work is part of the University’s Bennachie Landscapes project which is which is funded by a grant of £20K from the Arts and Humanities Research Council (AHRC),and working with voluntary conservation society, the Bailies of Bennachie. Other work has included archaeological digs on the hill, an oral history day with the chance hear and share stories about Bennachie, a music event in which people capture sounds on the hill which will then be developed into a composition, and events where locals will be offered the chance to learn methods for recording old buildings and to discover the archives held in the University’s Special Collections Centre.

Other local school teachers will also have the chance to find out more about the project at CPD days in the Bennachie Centre later this month and explore ways of building the heritage of Bennachie into the school curriculum.