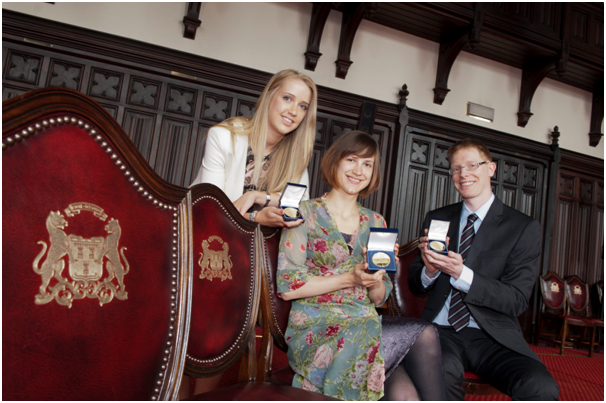 A single mother who has overcome learning difficulties to achieve her degree, and a mature student who is studying to become a doctor having dedicated years to helping disadvantaged people across the globe, were among the University of Aberdeen students honoured by the institution yesterday (May 31)

Eilidh Glendinning-Clark, Barrie Stevenson and Natalie Grieve are this year’s winners of the Aberdeen Quincentenary Prize.

The students were each presented with a £1000 cash prize and medal in honour of their achievements by the Lord Provost of Aberdeen, George Adam, at a ceremony held at the Aberdeen City Council Town House.

25 year-old Eilidh Glendinning-Clark from Aberdeen received the Quincentenary Prize for her academic achievements in the face of personal difficulties, including special learning needs.

The single mother of two is on course to graduate with a First Class Honours degree in Literature in a World Context and International Relations from the University this summer.

Eilidh’s second child was only four months old when she embarked on her University career in 2007.

She spent the first year of the degree programme studying on a part-time basis before changing to full-time studies in her second year.

Dr Janet Stewart, Senior Lecturer in German, and Film and Visual Culture at the University of Aberdeen who nominated Eilidh for the award said: “Eilidh will say that there have been times when she could not imagine keeping going, where financial worries, worries about the future or worries about her children might have caused her to doubt the advisability of pursuing a degree, What kept her going at such times was the recognition that the knowledge and skills she was acquiring were helping her be a better parent to her boys, by allowing her to set a positive example.”

Eilidh hopes that her academic accomplishments will one day, through writing and teaching allow her to inspire and empower others in difficult circumstances.

“She is an exceptional student, whose accomplishments to date are all the more impressive for the personal difficulties she has overcome.”

The commitment 36 year-old Barrie Stevenson has shown in studying for his degree in Medicine secured him the Quincentenary prize.

Barrie, who is from Cullen, was inspired to return to academia following years spent undertaking missionary work and teaching English as a foreign language in locations across the globe.

Having completed his first degree in Human Life Sciences at the University of Aberdeen in 1997, Barrie began working as a missionary – a role which took him to Copenhagen, where he helped build a church in an underprivileged area of the city, and America where he worked in soup kitchens and also spent a year training to become a church minister.

Barrie returned to the UK in 2001 and completed a certificate in Teaching English as a Foreign Language which led to teaching English in various organisations and communities in Poland and Oxford and Austria.

In late 2002 Barrie returned to the UK, sold everything he owned and became a novice monk in the Carmelite order.

Having decided religious life was not for him, he embarked on a backpacking trip which took him to Thailand in 2004 where he became a head teacher in a private school in a small rural town and met his wife. He spent much of his spare time running free English classes for less privileged people in the local area.

Barrie decided his vocation was to study medicine in 2008 and he re-taught himself standard grade Chemistry, Higher Chemistry, Physics and Maths before successfully applying to undertake his degree.

The Quincentenary Prize adds to the accolades Barrie has picked up during his studies which include a Year Distinction, the George Thomson Medal for the top student in the year, the Community Course Prize, and the Ross Taylor Prize.

Professor David Reid, Head of the School of Medicine and Dentistry at the University of Aberdeen who nominated Barrie for the award said: “Barry will make a fine doctor, and with his compassion and experience of helping the poor and disadvantaged for the past 15 years, is a wonderful candidate for this award.”

The Physics student from Aberdeen commits a large amount of her time to charity work, and has raised money for causes including Childreach International. She has also spent time in Dubai working with children with mental and physical disabilities in children’s homes, and volunteering as a piano and swimming teacher for schoolchildren.

In addition to maintaining an outstanding academic record throughout her studies, Natalie captains the University Squash team.

Dr Norval Strachan, Head of Physics at the University of Aberdeen nominated Natalie for the award. He said: “Natalie currently intends to pursue a career in medical physics. I am certain that she will go on to make a significant contribution. It is a great pleasure to nominate such a capable student who is such a credit to our University.”