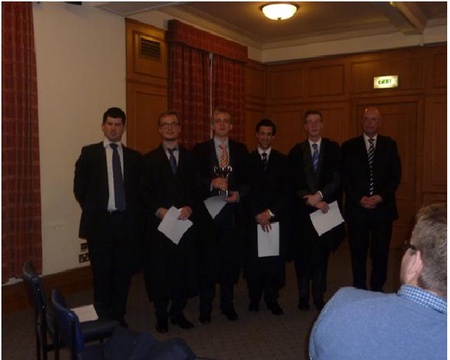 The University of Aberdeen’s Mooting society marked their 25th anniversary with the final of the Main Faculty Competition.

The contest was won by Nadia Sharif and Lynsey Reid who pitted their wits against Jon Benjamin and Mohammed Al-Ansari. The teams appeared before Lord Tyre, a High Court and Court of Session judge, who offered the teams his advice on how to make the most of every court appearance.

The Law Mooting Society was founded at the University of Aberdeen in 1987 to cater for a growing demand amongst the students of the Law Faculty to learn and develop legal skills and to put them to the test in a moot court setting. The very first Faculty Moot Court Competition, which took place in 1987-88, had eight teams and in the 25 years the competition has doubled.

Also as part of the celebrations, the University’s inaugural Clifford Chance Commercial Law Mooting Competition was won by Lukasz Andruchow and Jan Scholz who mooted against Fraser Stewart and David D’Aleo.

The competition, judged by Sheriff Peter Hammond was set up to reflect the increasing way that the law operates in the business world.

Neale Tosh, President of the University of Aberdeen Mooting Society, said: “Clifford Chance has shown tremendous support of mooting here at Aberdeen. They have been instrumental in helping us launch our first Commercial Law Mooting Competition and we are extremely fortuitous to have had the benefit of such generous support from a world class firm of lawyers who specialise in all aspects of commercial law. We are also very pleased that they have helped us celebrate our 25th birthday by supporting our Main Faculty Mooting Competition, a competition on which many now very experienced court practitioners have “cut their teeth” and which we are so pleased to see going strong after a quarter of a century.”

Issued by
The Communications Team
Directorate of External Relations, University of Aberdeen, King's College, Aberdeen
Phone
+44 (0)1224 272014
Issued on
07 May 2012