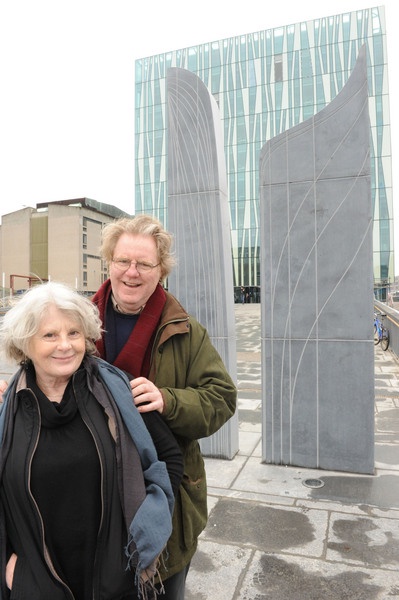 A sculpture inspired by an iconic Aberdeen ship will be unveiled at the University of Aberdeen today (Wednesday April 25).

The work, known as Waterlines, by renowned Scottish artists Marian Leven and Will Maclean, will provide a focal point in the academic square in front of the striking new University library.

The sculpture is based on the form of the iconic Aberdeen fast sailing ship Thermopylae.Built by Walter Hood and Co, she launched in 1868 and is considered to be the fastest sailing ship ever constructed.

It is made up of two shaped columns, 200mm apart, and is constructed from Kilkenny Blue Limestone.

The shape and incised lines also reference the Pictish standing stones of Aberdeenshire.

The sculpture has been gifted to the University by donors who wish to remain anonymous.

Leven and Maclean are Fife based artists who have exhibited prolifically in Scotland and beyond. Their work is rooted in Scottish and Highland culture and landscape, with Maclean drawing on his background as a seaman.

The sculpture extends his connection with the University and he was awarded an honorary Doctor of Letters from Aberdeen in 2009 in recognition of his contribution to Scottish art.

A short ceremony will be held ahead of the unveiling of the sculpture. Professor Ian Diamond, Principal and Vice-Chancellor of the University of Aberdeen, said the artwork would further enrich the visual landscape of the Old Aberdeen campus.

“The rationale for building the new Library was not simply to create a library with the modernity and capacity that our much expanded academic and student community needed but for the library as an important cultural asset for the City and the wider region,” he added.

“It is entirely appropriate, therefore, that we have in and around that library, artistic points of interest and inspiration and I am delighted that we have been able to engage sculptors of the quality of Marian and Will to help us do that.”