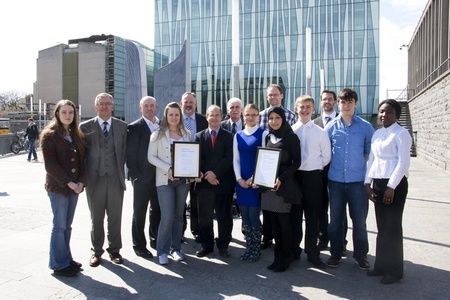 In the same week, the School has become formally accredited for its highly popular BEng and MEng degrees in Chemical Engineering.

The Chairman’s Award was presented at the IChemE Aberdeen Members’ Group Annual Dinner held at the Marcliffe Hotel and attended by 280 IChemE members and invited guests, including the Rt Hon Alex Salmond MSP, First Minister of Scotland, and the IChemE Chief Executive, Professor David Brown, and President, Professor Sir William Wakeham.  In his address, the First Minister spoke at length on the importance of what the Institution had achieved with these new Chemical Engineering degrees and their importance for the future of the energy industry.

Only five years ago a degree course in chemical engineering was launched at the University with just twelve students - only the second such programme to be launched across the UK in the previous two decades.

Now the School has become fully accredited by the IChemE for its MEng and BEng degrees in Chemical Engineering, boasting a total of 170 students, of which a high proportion are women.

Neil Atkinson, IChemE's Director of Qualifications and International Development, visited the Fraser Noble Building to meet staff and students, and presented lecturers Dr Neill Renton and Dr Euan Bain with certificates of accreditation for the two degrees, commenting on the huge work that had been done by staff, and the observations of the accreditation panel on how bright and enthusiastic the students are.

Neil Atkinson talked to the students about changes in the education of chemical engineers, including the transition from  the old tutor-led model to a more student-centred approach, which encourages creativity, and increases group-work, problem-solving, and the input of industry.

“The School is to be congratulated on launching these two programmes which are targeted especially at the needs of the energy sector, and with good links to industry,” said Neil.“You have a strong safety culture, purpose-built lab, and opportunities for further enhancement.”

The city of Aberdeen has one of the highest concentrations of professional chemical engineers in the UK, due to the offshore oil and gas industry. From discovery to recovery and much more, the chemical engineer has been at the centre of the hydrocarbon industry for over 30 years.