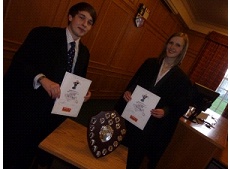 Last night saw law students Fiona Paterson and Daniel McLeman declared the first team to win the University’s new Employment Law Mooting Competition. The competition, set up by the University of Aberdeen Mooting Society, offers law students an opportunity to tackle real employment law issues that they may face when they enter into legal practice.

The moot was judged by Mr Reginald Christie, one of the chairmen of the local Employment Tribunal. After praising both teams for having clearly shown a great degree of preparation and research, he offered some tips on how the teams might approach court or tribunal appearances in future.

Ultimately, he decided that Fiona and Daniel had shown themselves as the stronger of the two teams and declared them to be the winners of the competition.

The case involved a claim of unfair dismissal made by Robert Wiseman. Mr Wiseman had been made redundant from his position as a sales director of Dale Craven Dairies. He claimed that his former employer had unfairly selected him for redundancy. Fiona and Daniel acted for Mr Wiseman’s former employer and pitted their wits against Beth Fullagar and Barry Reid, who appeared for the Mr Wiseman himself.

Neale Tosh, President of the University of Aberdeen Mooting Society said, “Tonight’s moot saw both teams tackle a challenging problem not centred around some obscure, academic issue, but which was based around a realistic scenario that employment lawyers may come across in their day-to-day practice. It is great to be able to offer students an opportunity to gain real skills that potential employers look for in trainees and young solicitors and which we hope will benefit students when they do enter practice.”

This year’s competition was sponsored by Quantum Claims Compensation Specialists. Quantum Claims’ Chairman, Mr Frank H Lefevre, presented the winners with their certificates and prizes and said “Quantum Claims is delighted to lend support to this Employment Law Mooting Competition.”