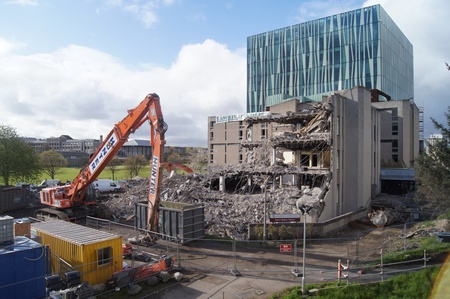 This week the Queen Mother Library – an academic home to students for the nearly 30 years - is being torn down with demolition work due to be completed by the end of May.

The building initially known as the Science Library was constructed in 1965 and extended in 1977-78 and then again in 1982.

It was officially opened by the late Queen Elizabeth The Queen Mother on October 2, 1983, when it replaced the University’s central library, which is now the King’s College Conference Centre.

The increased demands on QML led to the need for a bigger facility with more space for studying and computer facilities.

The state-of-the-art new University Library was completed and opened late last year, with an innovative design with ample space and light which has attracted praise from students and architects alike.

Prior to demolition, QML was stripped of more than 100 tonnes of recyclable material with shelves, office equipment and books donated to local and global charities.

The Aberdeen University Students Association (AUSA) took just over five tonnes of items, while 34 tonnes of metal and seven tonnes of wood were also recycled.

The site of the former QML will be transformed into a landscaped space and will include disabled parking and a bus turning circle and drop-off point  just off Bedford Road.

The area will be landscaped into a green space with trees and other foliage to be planted with the entire project to be completed by the end of August.

The area will be landscaped into a green space with trees and other foliage to be planted, with the entire project to be completed by the end of August.

Chris Banks, University Librarian and Director of Library, Special Collections and Museums, said “We will look back fondly on the Queen Mother Library. We had a small party when it closed. A number of colleagues had worked there for more than 30 years, and there were a lot of fond memories attached to life in the building. We spent time reminiscing and sharing stories - including one of a student who was well known to staff for overdue books, who once brought in a box of chickens and set them loose in the library!”