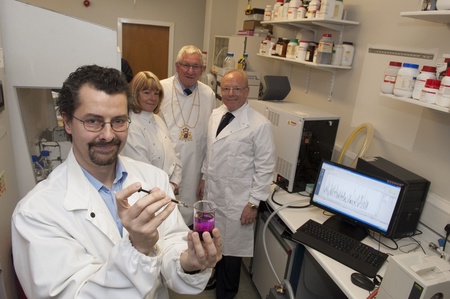 Researchers at the University of Aberdeen are to benefit from £50,000 raised at a charity dinner held in memory of Alzheimer’s sufferers.

The Funny Memories dinner was organised on behalf of the Lord Provost’s Charitable Trust by Charles Bain, whose late father Charlie and father-in-law Roy both had Alzheimer’s disease. This was the second dinner organised by Charles, who previously raised £19,000 for an activity bus.

Around 300 people attended the dinner at Aberdeen’s Mercure Ardoe House Hotel on Saturday, March 24, which raised £33,500 for a high-tech piece of kit that will aid imaging helping to detect early signs of dementia.

Main sponsor Apache North Sea, the oil and gas exploration and production company operating in the Forties and Beryl Fields, then generously topped up the fund by £16,500, taking the total raised to £50,000.

Charles, who is director of CEURO Communications Ltd, said: “I was absolutely blown away by the success of the dinner, and by the generosity of Apache North Sea for their extra donation which took the total to £50,000.

“My goal was to raise more than £25,000 towards an analytical unit called a Mass Spectrometer, so to raise double that is amazing. The equipment will be instrumental in identifying the early stages of dementia and be the vehicle for many people to get early treatment, minimising the emotional and financial challenges this brings to families, friends and health organisations.

“I’d like to thank everyone who attended the dinner and gave so much money through the raffle and silent auction, and to all who supported the event, particularly Apache North Sea.”

All the proceeds will support the university’s Brain Imaging Team, which is working on a number of innovative projects at the forefront of the fight against dementia and has made significant progress in utilising brain imaging techniques to detect the early signs of diseases leading to dementia in older people.

Professor Matteo Zanda, Chair in Medical Technologies and facility manager of the J. Mallard Scottish Positron Emission Tomography (PET) Centre at the University of Aberdeen, said: “The event was brilliant and superbly organised. I would like to express my deepest gratitude to Charles Bain, to the sponsors and to all those who attended this great night and donated so generously.

“The fund will allow the J. Mallard PET Centre and the Kosterlitz Centre for Therapeutics to acquire a Mass Spectrometer for the analysis of tracers, which are radioactive diagnostic molecules used in PET Imaging. This sophisticated instrument will be a key asset for boosting Aberdeen's research on novel diagnostics for Alzheimer's disease and other neurodegenerative pathologies.”

Patricia Paterson, assistant to Apache’s U.K. Vice President and Managing Director Jim House, attended the dinner and made the announcement about the company’s donation.

She said: “Investing in the communities in which we operate is an integral part of Apache’s corporate outreach programme. Apache has a strong commitment to give something back to the local community here in Aberdeen and having the ability and opportunity to support this fundraising event is a real privilege. The Funny Memories dinner was a fantastic success and we were delighted to be a part of such a great event.”

Celebrity ventriloquist Paul Zerdin was the guest star at the dinner, fresh from appearances on the Royal Variety Show and ITV's Tonight at the London Palladium.

Lord and Lady Provost Peter and Sandra Stephen joined guests for a drinks reception before dinner, a silent auction and raffle, followed by dancing to 11-piece band Aristocats.

The Lord Provost’s Charitable Trust has previously backed the appeal, which is also being supported by city social care charity VSA and Raeburn Healthcare, which provides nurse-led healthcare and care at home services, enabling clients – including many who have Alzheimer’s - to live as independently as possible with privacy and dignity in the comfort of their own home.

The Lord Provost’s Charitable Trust is a fund independent of Aberdeen City Council, set up for the millennium to support good causes of all kinds in the city.