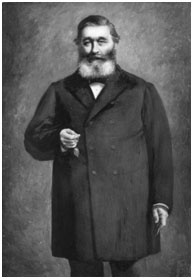 Organised by the University of Aberdeen’s Research Institute of Irish and Scottish Studies, in collaboration with Aberdeen City Council, Great Aberdonians celebrates some of the city's well travelled sons who made their mark on society.

In Dunedin, the second-largest city in the South Island of New Zealand, is an area named Macandrew Bay in honour of Aberdeen-born James Macandrew (1819-87).

He emigrated from the Granite City with his family in 1850, sailing on a schooner that he and his brother-in-law had bought and filled with cargo to sell on the other side of the world.

His rise to fame in the world of commerce and then politics will be charted at tomorrow’s lecture, to be given by Marjory Harper, a professor in the University’s School of history who specialises in Scottish emigration in the nineteenth and twentieth centuries.

She will explain how Macandrew soon became part of the commercial fabric of the new province of Otago, with shipping and trading interests, and established a steamer service between Dunedin and Melbourne.

He then ventured into politics, representing Dunedin in the New Zealand Parliament for three terms in the 1850s, and serving two stints as Superintendent of the Province of Otago: 1860-1 and 1867-76, with a special interest in education.

He was instrumental in establishing training colleges and schools, as well as the University of Otago, and after his death a memorial scholarship was established to send deserving medical students from Otago to Marischal College to complete their training.

Dr Michael Brown, a lecture in history at the University and organiser of the Great Aberdonians series, says Macandrew’s connections to the north-east are often overlooked.

“James Macandrew was at once a significant figure in the politics and culture of New Zealand, and proud of his roots in Scotland and Aberdeen.

“I am sure this will be a fascinating insight into how the city has shaped a society on the other side of the globe; one that still understands itself as deeply indebted to Scottish migrants.”

The lecture will be held in theTown and County Hall, Town House, Union Street, Aberdeen and begins at 7.30pm. Entry is free and booking is not required.