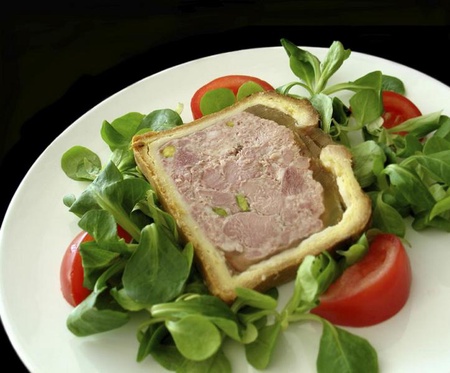 Aberdeen researchers have found further evidence that one of Britain’s most popular starters - chicken liver pate - can be a source of food poisoning if it is not cooked properly.

University of Aberdeen scientists bought raw chicken livers from a typical range of supermarkets and butchers over a two-year period and, after testing in the lab, discovered the bug Campylobacter in 81% of them.

In a study published in the International Journal of Food Microbiology the researchers also reveal that 56% of the types of Campylobacter found in contaminated chicken livers matched the 10 most common strains of the bug found in people with Campylobacter poisoning.

Dr Norval Strachan, a researcher into food safety and epidemiology, at the University of Aberdeen, said: “In the UK there are an estimated 500,000 cases of Campylobacter infection per year of which more than 15,000 are hospitalised and approximately 75 die as a result.

“Although outbreaks - clusters of linked cases - of Campylobacter are not common, last year 14 outbreaks of the bug in the UK were associated with consumers eating chicken or duck liver paté.

“By cooking the livers properly and ensuring good hygiene in the kitchen these episodes can be avoided.

“However some celebrity chefs and many recipes advocate only partially cooking chicken liver to ensure that it is pink in the middle.

“But this is recipe for disaster because there is a very fine line between cooked and undercooked. If it is undercooked, the consequences are severe as Campylobacter can be a very nasty form of food poisoning especially in a young child or the elderly.”

Dr Ken Forbes, a molecular epidemiologist studying human pathogens at the University of Aberdeen, added: “Our study brings to mind a large Campylobacter outbreak in north-east Scotland a few years ago in which approximately one half of the 165 people who attended a buffet dinner dance were struck down with the bug.

“The study identified chicken liver paté as the most likely vehicle of infection as its preparation involved the deliberate undercooking of chicken livers by flash-frying.

“My advice would be if you are served pink livers in a restaurant then send them back to be cooked properly.”

The high prevalence of the bug found in chicken livers in this study is in line with earlier University of Aberdeen research conducted in 2006 which showed Campylobacter in 90.4% of more than 100 shop bought chickens.

A separate New Zealand study also showed that 90% of positive Campylobacter chicken liver samples contained the bug in internal tissue and that flash frying might be ineffective at killing all of the pathogen present.

Dr Strachan added: “There is a growing epidemic of human campylobacteriosis in the UK with laboratory reports showing 69,281 cases in the UK in 2010 which is a 35% increase since 2005.

“These rates are likely to be substantial underestimates of the actual disease burden because it is estimated that only one in seven cases are reported in the UK.”

“The growing number of chicken liver Campylobacter outbreaks may not explain the whole reason for high levels of human campylobacteriosis in the UK, since these outbreaks only encompass a small fraction of cases.

“However here we have shown that the prevalence of Campylobacter in chicken livers is high and that a number of these strains are identical to those commonly found in humans.

“As a result we believe caterers should treat livers as likely to be contaminated with Campylobacter. They should take care to avoid cross contamination with other foodstuffs and surfaces and ensure adequate cooking time to ensure successful killing of this pathogen. Only once this has been achieved will the number of reported outbreaks decline.”

This study was funded by the Food Standards Agency. Dr Jacqui McElhiney, policy advisor at the Food Standards Agency in Scotland, said:  “Unfortunately, levels of campylobacter in raw chicken are high, so it’s really important that chefs thoroughly cook chicken livers fully to kill any bacteria, until there is no pinkness left in the centre, even if recipes call for them to be seared and left pink in the middle. It’s the only way of ensuring the paté will be safe to serve to their customers.”

The Agency is working closely with the UK poultry industry and retailers to develop targeted actions along the food chain to reduce levels of campylobacter in UK-produced poultry.