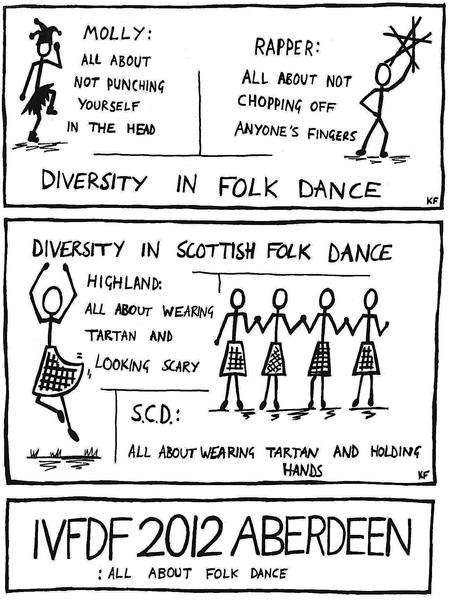 Hundreds of people from around the world are descending on Aberdeen this weekend to attend the 61st Inter-Varsity Folk Dance Festival (IVFDF), the UK’s longest-running folk dance festival.

The event is expected to attract students from as far afield as the US, Europe and South America, and residents of the northeast can also join the fun.

Liz Jones, coordinator of the event, said: “Every year the festival takes place in a different city and it has never been this far north.

"This is a landmark for the festival and university.

"It will be the biggest event held in the Butchart since it became home to the Student Association.

"The development of Butchart as a student venue allowed us to bring this unique event to Aberdeen.

“There will be over 40 different dance and music workshops to choose from.  It is a chance to a bit of anything, from Tudor dance to American square dancing.”

Jennifer Banister (27) a University of Aberdeen student and IVFDF veteran said: “I was at last year’s IVFDF in Bristol and I am so excited that it has come to Aberdeen. The Balkan dances are terrific fun.”

From Saturday morning there will be workshops to discover or re-discover:

A Morris tour will be conducted around Aberdeen from 10:30.

Kicking off the weekend is the infectious sound of the Teesiders singing duo Megson, and later in the evening, Deadly Winters, a band of three brothers will bring their heartfelt and emotive story-based music to the stage.

On Saturday night the premier Scottish ceilidh band Clachan Yell will be performing along with a late-night blues band the MP and the Expenses.

Sunday will finish the weekend off with a truly unique experience. The Survivors' Ceilidh will begin in the at two in the afternoon with ‘scratch band,’ a spontaneous gathering of the musicians coming together.

Jennifer said: “One of my favourite parts of IVFDF is the scratch bands. All weekend, in little corners and late into the night musicians just start playing and people start dancing. The atmosphere is amazing.”

On Sunday, the band will get smaller and smaller as musicians go home, until the event closes.

Weekend festival passes are now available to purchase online, costing £18 for unwaged and concession, or £28 for waged visitors.

The Monster Ceilidh Band have taken their cross-genre ceilidh music all over the world, entertaining generations new and old whilst retaining the true spirit of ceilidh.

The Aurora Ceilidh Band plays traditional music for ceilidh dancing in lively and innovative style. The band lineup includes accordion, fiddle, flute, mandolin and guitar. Their repertoire includes a number of Scottish and international dances picked up along travels to international folk dance and music festivals.

IVFDF is an exciting and dynamic festival held at a different university each year. IVFDF has been running since 1951 and is the country's longest continually running folk festival. The tour so far spans over 20 locations as far apart as Exeter in the south and Glasgow in the north. The Festival is open to everyone and caters for a wide range of ages and interests with numerous ceilidhs and workshops covering a wide range of dance styles: Scottish Country, Highland, Morris, Rapper Sword, Irish, and Playford are typical examples, with plenty more exotic workshops varying from year to year.

The keyword is festival: hundreds of people attending for three days and two nights of intense dancing, playing music and singing, until they are unbelievably exhausted! A non-stop weekend of music and dance from the British Isles and beyond - there is the option of sleep for those who can bear to miss something.