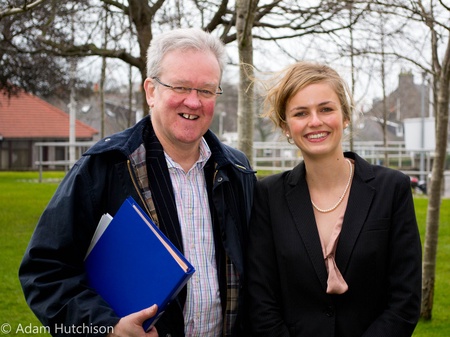 Scotland's Minister for the Environment and Climate Change, Stewart Stevenson MSP, visited the University of Aberdeen on Friday 10 February to speak at Scotland's Commitment to Mitigating Climate Change and an Outlook on the Rio+20 Summit, an event organised as part of the University’s student-led Go Green Week.

The Minister’s talk was followed by a presentation from Dr Mark Reed and Jasper Kenter of the Aberdeen Centre for Environmental Sustainability (ACES) on the exciting sustainability research taking place at Aberdeen and which is focusing on areas across the world from the Cairngorms to the Pacific rainforests.

Aberdeen University United Nations Youth and Students’ Association (UNYSA) hosted the event in light of the upcoming Rio+20 Summit, the conference which seeks to secure renewed political commitment for sustainable development, assess the progress to date and the remaining gaps in the implementation of the outcomes of the major summits on sustainable development, and address new and emerging challenges.

Student Sara Traubel is president of the society and organised the visit. Sara said "We at the UNYSA society are very pleased that the Minister was able to give this speech. It's great to see a politician who is willing to engage with students on issues of such global importance."

UNYSA is the youth wing of the United Nations Association (UNA) UK, an organisation which aims to promote the mission of the United Nations and offer a space for people to scrutinise the organisation's work. The Aberdeen branch holds talks on various UN-related topics, weekly Model UN sessions (which is a simulation of the negotiations at the UN headquarters in New York and a great way for students to enhance their debating skills), and hold fundraising events as well as supporting UN agencies in times of catastrophe. The University society was established in 2009 and has already won two Aberdeen University Students' Association (AUSA) awards, one for the best new society, and one for fundraising achievements.

The Ministerial talk was part of the University’s Go Green Week of events around campus aimed at raising awareness of environmental issues for students and staff. Many societies, organisations and members of staff were involved in a diverse programme including competitions, stalls, film nights, debates, and free training.

Go Green Week was organised by Hannah Towsey, Climate Change Coordinator for AUSA, and Jane Morrison, a student intern working in the University's Environment Office. During the week themed days such as 'Travel-light Tuesday' promoted specific topic areas. While individual events provided particular highlights, the pedal-powered cinema and Transition Edinburgh training provided popular, in addition to the talk by Minister Stewart Stevenson. Organisers are keen to thank the wide range of organisations from ACES through to Waste Aware Aberdeen who supported the week.