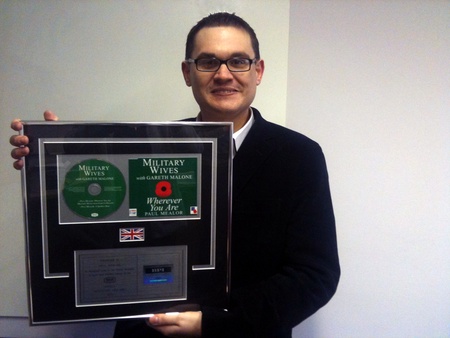 It is an accolade presented to the world’s top pop and rock stars but now an Aberdeen academic has joined an exclusive club of platinum disc holders.

Composer Paul Mealor has been presented with the framed disc for his piece written for the Military Wives Choir, which became the fastest selling UK single since Elton John's Candle In The Wind in 1997.

Wherever You Are, which Professor Mealor wrote after reading the moving letters and poems written by the partners of servicemen, also took top spot in the Christmas chart.

He was drafted in by choirmaster Gareth Malone after he managed to convince over 100 women to join a choir after visiting military bases in Chivenor and Plymouth for BBC2 series The Choir.

To mark its success and the sale of the 600,000th single, record company Decca presented Professor Mealor, who teaches composition in the University of Aberdeen’s department of music, with the disc.

He said that as a classical composer it was an accolade he never expected to achieve.

“It has been an absolute honour to be involved with the Military Wives choir and this tops off what has been a wonderful experience.

“I was thrilled to be asked to write a piece for the group but I couldn’t have envisaged how it would capture the public imagination.

“For my work to reach out to so many people in this way is absolutely fantastic on a personal level but more importantly it has also helped forces’ charities. .

“As a classical composer I never thought I’d reach a wide enough audience to gain a platinum disc. It will definitely be taking pride of place on my wall!”

Sales of Wherever You Are have netted more than £500,000 for the Royal British Legion and the Soldiers, Sailors, Airmen and Families Association (SSAF).

The Military Wives Choir is also in the running for a Brit Award having been nominated in the Best British Single category, with the winner to be announced on February 21.