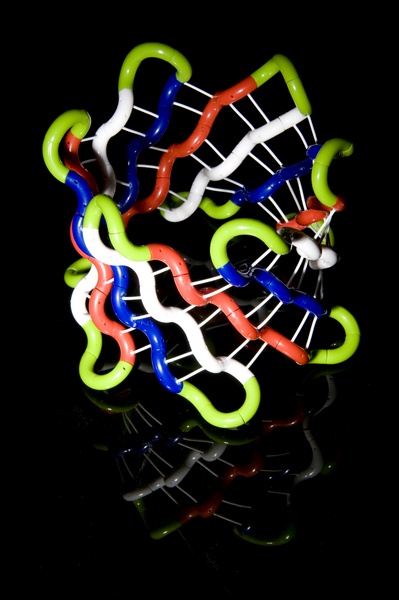 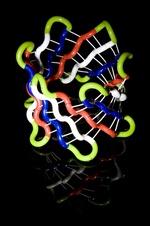 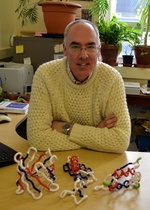 An innovative new toy to teach youngsters how proteins function in the human body has been created by an Aberdeen scientist.

Tangleproteins aim to develop understanding about what the proteins in our bodies are made of and the vital roles they play – from helping us breathe to regulating our blood sugar.

Professor in Chemistry at the University of Aberdeen, Marcel Jaspars, developed the invention in collaboration with toy manufacturer TangleCreations.

The toy – which allows you to build different proteins by linking together small plastic structures - will be launched before an international audience of industry representatives at the 109th annual American International Toy Fair which takes place in New York this weekend.

It was a birthday gift that inspired Professor Jaspars to create Tangleproteins.

He said: "My wife gave me a small Tangletoy for my birthday a few years ago and I was immediately captivated by how the Tangle moved and could be flexed. At the time I was researching some natural molecules with anti-cancer activity and I noticed how the Tangletoy could explain the way that these molecules moved.

"A few months later I visited the Tangle Creations headquarters in California with my family where we met Richard X Zawitz, the inventor of the Tangle. We discussed how the toy could be used to explain very complex scientific phenomena, and so begun our collaboration.

"Ironically, following that meeting, I was presenting my research at an international conference, and when the projector failed I was still able to give my entire talk and explain the science using a massive Tangle - much to the amusement of the audience!"

A commercialisation grant from the University of Aberdeen brought their idea for Tangleproteins to fruition.

Professor Jaspars hopes the toy will now be used as a way of conveying the important role proteins play in the human body, in a simple and fun way.

He said: "We often think of protein as one of the basic food groups, contained in products such as meat, fish, eggs, beans and dairy foods, but the truth is that proteins are the building blocks of life.

"A large part of each one of us is made of protein, and proteins play many roles in our bodies ranging from the protection provided by our skin to the sending of signals to regulate our blood sugar.

"There are twenty common building blocks called amino acids that make up all proteins. Each amino acid has some common features, as well as different parts that distinguish them from each other and give them individual properties.

"The amino acids are connected together in a chain often called a polypeptide chain, in an order encoded by DNA. It is this unique order of amino acids that gives each protein its characteristics, such as being involved in signalling or speeding up reactions in our bodies.

"I hope the Tangleprotein will be used to teach the protein structure in schools and universities in an intuitive and visual way. Feedback from colleagues in other universities and the pre-orders which have already been placed suggests there is a lot of interest.

"I think part of this is that is it is really good fun to play with these and by doing so you learn a lot about how proteins really work – you can hold, inspect and manipulate them, which you cannot do with a computer model."

Tangleproteins will launch at the American International Toy Fair 2012 which takes place from February 12 – 15 at the Jacob K. Javits Convention Centre in New York.