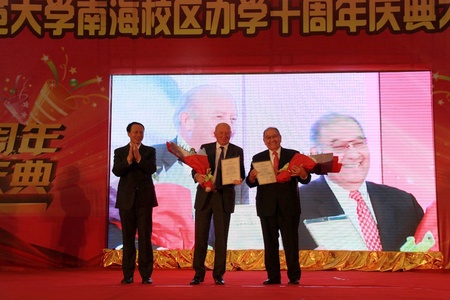 Guangzhou city has undergone remarkable changes as a result of the Asian games in 2012 and the city centre is now one of the most beautiful cityscapes in China.

Dominic Houlihan visited the campus soon after it was opened in 2001 and discussed then constructing an agreement between the two universities for a 2 + 2 arrangement where SCNU students spent two years in China and two years in Aberdeen.

That agreement was signed in 2007 and since then many SCNU students have visited Aberdeen, principally to study business degrees.

In addition many staff have taught at SCNU to prepare the students for their transition to Aberdeen.  Dr Harminder Battu, Dr Mark Whittington, Dr Barbara Fennell and Dr Julian Randall have all visited SCNU and taught there.

“We have signed a further three agreements with SCNU leadership since 2007 which cover student exchanges and opportunities in education training,” commented Professor Houlihan.

“We have had a two year research and development project funded by the British Council, and a jointly developed full time MEd degree, which the first cohort of students from SCNU are currently studying very successfully in the School of Education in Aberdeen.

“We are very proud of the leadership exchange programme which has seen school principals from across Guangdong visiting Aberdeen.

“We expect that many more students from SCNU will study Postgraduate Taught programmes in the School of Education in Aberdeen over the next few years.

There were further discussions on expanding the growing relationship and renewing the agreements next year after five years.

The University of Aberdeen counts SCNU as one of its best friends in China.