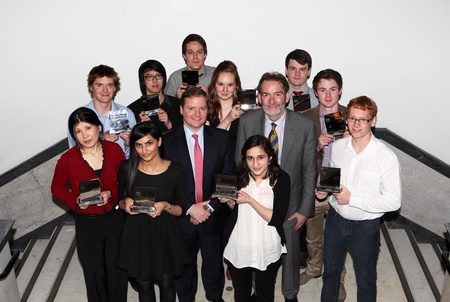 Talisman Energy (UK) Limited has extended its scholarship scheme with the University of Aberdeen through which students receive financial and mentoring support to become the next generation of oil and gas professionals.

Talisman's investment in future talent for the UK oil and gas industry has topped the £1million mark after the company agreed to extend its pioneering Scholarship Programme.

Launched in 2006 with an initial investment of almost £800,000, the programme has provided support to students at both the University of Aberdeen and the Robert Gordon University.

The RGU scholarships run until 2015, while the University of Aberdeen’s initial tranche of funding supported young people studying industry-related disciplines up to and including the 2011 intake.

Talisman has now signed up to provide a further £300,000 at the University of Aberdeen over the next six years, which will see another wave of students receiving financial and mentoring support as they gain the knowledge and skills to become the next generation of oil and gas professionals.

The company’s UK Senior Vice President Geoff Holmes said: “Talisman set the benchmark with the Scholarship Programme in 2006 and many of our peers have since followed the same path recognising that an investment of this type is a meaningful way of developing the talent our businesses require now and in the future.

“I am delighted we have agreed an extension of the programme at the University of Aberdeen. The work the university has done to expand teaching and learning in key skills for the oil and gas industry is worthy of praise and of the support we are announcing as we welcome the next intake of Talisman scholars.

“To those who have followed Talisman’s lead in ensuring we have a conveyor belt of highly skilled, well-motivated young people who share our belief that the North Sea has a long and prosperous future, I say thank you. To those who are watching from the sidelines, my message is simple: invest in the future, because people are the most important asset our industry has.”

“Together we can ensure they have the skills, qualities and international outlook to take on the challenges and exploit the opportunities facing the energy sector over the coming years.”

Thirteen new scholars received their awards at a special ceremony staged at Aberdeen Art Gallery on Tuesday 29 November, attended by their friends and families along with staff from Talisman and both universities.

For more information on the Talisman Scholarship Programme contact Jonathan Moore at Talisman on 01224 352977 .