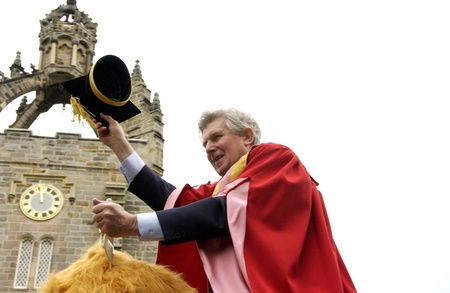 Students and staff at the University have paid tribute to Stephen Robertson, their former Rector who has died following a short illness.

Steve will be remembered with great affection by students, staff and University Court members alike, for his enthusiasm, commitment and love for the University - and most especially his dedication to the welfare of students.

University Principal Professor Ian Diamond said:  "We are very sad to hear of the death of our former Rector, Stephen  Robertson, and our thoughts are very much with his family and his many friends. I know that my colleagues on the University Court will join me in expressing our sadness at  this news, and would want to pay tribute to an excellent colleague and an outstanding champion for our students."

Tessa Birley, President of the Aberdeen University Students Association added: "Steve was a fantastic Rector whose warmth and friendliness will leave a lasting impression on all those students who met him. Personally, it was always a pleasure to catch up with Steve for a chat. He was a great support to me in my role; always willing to share a story of his own experiences, as well as telling me about mischief he and his friends had got up to at the University. His stories would always make me laugh! He was a truly charming gentlemen and will be sorely missed by all."

Steve's election in 2008 to serve as Rector was the culmination of a long, and very strong, association with the University, stretching from Steve's own student days - starring in the student shows and on the squash courts - to a continuing interest throughout his extremely successful career, and leading to his election by the student body to serve as their champion for a three-year term which finished in summer 2011.