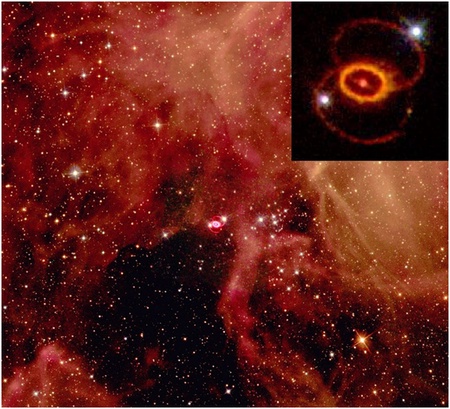 Physicists from the University of Aberdeen have contributed to a new theory on the mysterious mechanism that causes the explosion of massive, or core, stars.

These ‘Type II supernovae’, the term given to exploding core stars, are huge and spectacular events – intriguing because for a short time they emit as much light as is normally produced by an entire galaxy.

In fact, the enormous amount of energy they release is second only to the Big Bang itself. While there is general agreement on how the collapse of a core star begins, how the energy escapes from the star (the process that causes the explosion) is not fully understood.

A paper published in Physics Letters B (3 November 2011) offers a new theoretical explanation.

A core star collapses when it runs out of the nuclear fuel it depends on and folds in on itself in less than a second under its own huge weight. This process releases enormous amounts of gravitational energy, causing an explosion.

A small fraction of the total energy released during a supernova Type II (collapse of a lone massive star that burns energy through fusion), is emitted as light, the kinetic energy of the exploding stellar envelope is 10 times greater again, but by far the most energy is carried away by neutrinos. It is by studying these neutrinos (among the most difficult particles to detect) that physicists have come to general agreement that gravitational collapse does start the Type II supernova process.

Less understood is whether the outgoing pressure wave causing the explosion - that soon becomes a huge shock wave - travels all the way out and ejects the outer part of the star. Simulations have shown that the prompt shock stalls at distances of about 300 km from the centre because of the immense energy required to keep its momentum. Further simulations have found that the shock could re-start if the electrons could absorb a small amount of energy - about 1% of the neutrino energy available.

Physicists at the University of Aberdeen, STFC’s Rutherford Appleton Laboratory, the University of Strathclyde and the Instituto Superior Técnico in Lisbon suggest in Physics Letters B that the solution to the Type II supernovae mystery might lie in a fundamental field long proposed by physicists to answer many important questions. They claim that a component of gravity called the ‘scalar gravitational field’ may be the driving force behind the release of energy that causes the star to finally explode. The existence of scalar fields are predicted but have not yet been detected.

Dr Charles Wang, from the University of Aberdeen, led the study. He said: “This is a new explanation for an unsolved problem – one of the most important in astrophysics.

“Supernovae explosion is the main source for cosmic rays and these affect our own climate and even genetic evolution.

“Since the creation of the universe the most powerful events are supernovae explosions  and when they occur they can even be seen in daylight.

“It is important that we understand how this huge amount of energy escapes from the star and we believe our paper goes a long way to explaining the mystery of this ‘missing energy’.”

Professor Bob Bingham from STFC and the University of Strathclyde, explains how scalar fields could hold the ‘key’ to the mystery. “Scalar fields, unlike electromagnetic fields do not have a direction. They are needed to explain inflation in the early universe and dark energy in cosmology. They are also being hunted at CERN’s Large Hadron Collider as the Higgs particle, giving rise to the origin of mass. In our case, we believe it is responsible for accelerating particles”, he said.

“The theory is that emission of these scalar gravitational waves from the neutron core of a collapsing heavy star may re-energise the stalled shockwave”, added Dr Wang.