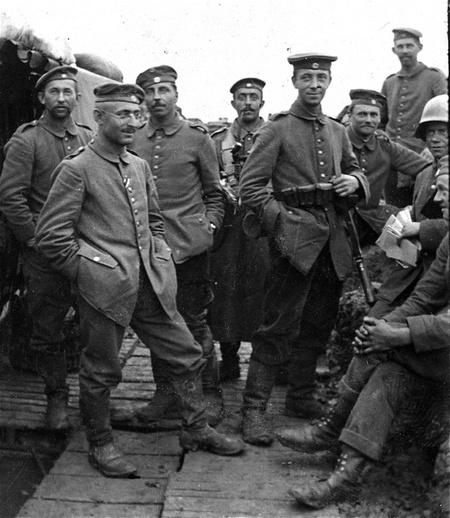 A best-selling book by an Aberdeen historian which questions Hitler’s First World War record has led to the discovery of new information further undermining the ‘war hero’ persona used to great political effect by the dictator.

The new records shed fresh light on Hitler’s early attitudes towards Jews and his psychiatric disorder on the eve of his emergence as a fascist dictator in the making.

Hitler’s First War, by Dr Thomas Weber, Reader in History and Director of the Centre for Global Security and Governance at the University of Aberdeen, paints a very different picture of Private Hitler with previously unseen archive material and letters revealing he was viewed by many of the frontline soldiers in his regiment as a ‘rear area pig’ or ‘Etappenschwein’.

It challenges the belief that the First World War politicised, radicalised, and ‘made’ Hitler, presenting a Hitler who returned from the trenches of the First World War in a confused state of mind and with political attitudes that were fluctuating between ideas of the Left and the Right.

Following the publication of the book last year, Dr Weber was contacted by the relative of an American physician with new information regarding the Führer’s medical history, as well as the son of a Jewish soldier who served in Hitler’s List regiment*. This testimony discredits some of the key tenets of Nazi propaganda and questions the standard interpretation about the origins of the Jew-hatred of the architect of the Holocaust.

Crucially, a number of letters given to Dr Weber cast serious doubts on Hitler’s mental state at the end of the First World War.

“Hitler himself claimed that the war ended for him when he had to spend weeks in an army hospital after having been blinded by mustard gas. Circumstantial evidence and hearsay, however, have led to the suggestion that Hitler was, in fact, suffering from and treated for psychosomatic blindness. This hypothesis could never be conclusively tested, as Hitler had his medical file destroyed and had his henchmen kill those people with knowledge of the file,” said Dr Weber

The letters made available to him were exchanged between two prominent American physicians and confirm that Hitler was treated for hysterical amblyiopia, the psychiatric or conversion disorder commonly known as hysterical blindness. This previously unseen evidence is included in the paperback version of Hitler’s First War, due out on October 13.

The letters were written in the spring of 1943 and recount their encounters with Otfrid Foerster, one of the most famous neurologists and neurosurgeons of the first half of the 20th century. Foerster had told his American colleagues prior to the war that he had seen Hitler’s medical file about his treatment at Pasewalk military hospital in 1918, sharing with them that according to the file, Hitler had indeed been treated for hysterical blindness.

“The two letters are so important because they confirm that we really have to look at Hitler’s mental state and his radical personality change in the aftermath of the war if we want to understand the sudden metamorphosis of an awkward soldier in whom none of his superiors had seen any leadership qualities to a self-assured charismatic leader less than a year after the end of the war,” Dr Weber added.

Dr Weber’s book reveals that, contrary to the claims of Nazi propaganda, anti-Semitism was largely absent within Hitler’s unit and that Hitler had not distinguished himself as an anti-Semite during the First World War. This was given further credence when he was contacted by the son of Bernhard Lustig, a Jewish veteran and Zionist from Hitler’s regiment, following the publication of Hitler’s First War.

Lustig’s recollections provide ‘an independent and fascinating confirmation about the findings of this book about the wartime attitude of Hitler and the men of his regiment towards Jews, as well as about Hitler’s character during the war’, said Dr Weber.

The postwar testimony by Lustig, who served as a non-commissioned officer in the regiment, confirms that Hitler had not shown any leadership qualities during the war and recounted that, as an introvert, Hitler never participated in parties at regimental HQ.

In testimony given in 1961, he also reported to have been friends with one of the commanders of Hitler’s regiment and said his friend had once confided in him that he would not promote Hitler because he ‘could not stand him’.

Unlike Hitler, Lustig –regularly met up with other veterans of the List regiment after the war. During these meetings, many officers expressed their shock and surprise about Hitler’s sudden emergence as a political leader.

Lustig, who emigrated to Palestine in 1933, maintained that during their encounters Hitler had never displayed any anti-Semitic tendencies and that the officers of the regiment has gone out of their way to allow Jewish soldiers on the front line to practice.

Dr Weber said he was delighted by the interest shown in Hitler’s First War and in addition to the two new sources of evidence detailed in the paperback version, he is currently investigating three other testimonies which have come to light following publication.

“Since the hard-back edition of the book was published I have also been contacted by relatives of other significant figures from Hitler’s regiment which offer further insight into the ‘real’ story of the dictator’s First World War record and I am currently verifying this new information.

“It is wonderful that the book has generated such interest. Before I started my research, I had imagined that almost everything there was to know about Hitler had already been uncovered but not only have I found a wealth of new archive material, I have been fortunate enough to be contacted by those in possession of first-hand insight into one history’s most controversial figures.”

Hitler’s First War is published by Oxford University Press and will be available from all good bookshops in paperback from October 13.

It has been selected as ‘Book of the Month’ for October by the History Today Book Club.

Other key findings presented in Hitler’s First War include:

The Nazi Party worked to suppress and discredit accounts of the Great War that showed him as anything other than heroic — including an account written by Hitler’s commanding officer, as the myth of Hitler as a brave soldier was used by the Nazi party from the beginning in order to extend its appeal beyond the far right.

Further details can be found at http://www.abdn.ac.uk/news/details-8903.php