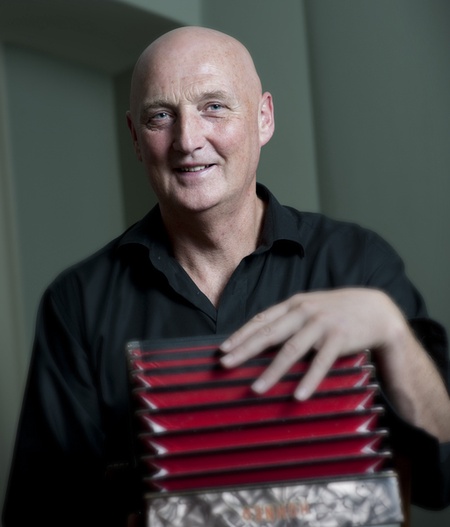 Moothie maestros and ace box players from across Scotland and beyond will gather in Aberdeen next month.

"The Convention will be just the place to enjoy the appealing music of these delightful instruments by some of the very best talents around, both local to Scotland and from further afield,” said Prof. Ian Russell, Director of The Elphinstone Institute. “It will be an excellent opportunity to find out more about the instruments and their music."

The weekend event will allow visitors to try a taster session, join an elementary workshop or, for the more experienced, learn about style and repertoire at a players’ workshop.

There will also be opportunities for informal sessions in local music-friendly pubs, such as the Blue Lamp and the Prince of Wales.

Full programme details and booking on line are available at http://www.abdn.ac.uk/elphinstone

Guests at the Free Reed Convention include:

Brendan Begley sings and plays button accordion music of his native West Kerry. Born into a famous musical family, the slides, polkas, songs and slow airs all run through his veins. Three solo albums to his name, he also plays with Boys of the Lough and Beginish, and works with TG4 researching and presenting radio programmes.

Donald Black from Benderloch in Argyll is Scotland’s foremost exponent of traditional music on the mouth organ. Self-taught, with his own unique style, he plays the tremolo harmonica and is a master of Highland pipe tunes. He has performed internationally and recorded several CDs.

George Current is a highly respected moothie player from Edinburgh, who plays regularly in the sessions at Sandy Bell’s Bar and leads an informal moothie group. He specialises in Scottish country dance and pipe tunes, and has wide experience of leading workshops.

Fred Davidson of Banchory is a well-known melodeon player in the North-East. He has played at all the local festivals and won many competitions.

Roger Digby has been playing Anglo concertina for over thirty years. He plays in a fiercely English style, as with Flowers and Frolics, and extends the instrument’s range far beyond its assumed limitations. He has accompanied Bob Davenport and has a passionate belief in the integrity of traditional music.

Ernie Gordon from Alnwick, Northumberland, plays tremolo moothie as well as other mouth organs, Jew’s harp, and bones. He was a great friend and admirer of the late Will Atkinson, and wrote and edited a commemorative book about him.

David Gray and Matt Quinn are melodeon players and have both studied at Newcastle University for the Folk and Traditional Music degree. Matt also sings and plays fiddle.

Bryce Johnstone was born in Leslie, Fife, into a piping family and was introduced to the ‘moothie’ by his mother. For over thirty years he has been a great favourite at festivals in Scotland and an experienced workshop leader.

Dave Lorimer performs Scottish songs and tunes on ‘moothie’ and guitar. He teaches harmonica at SC&T classes and is an enthusiastic busker for good causes.

Mary Mac Namara’s concertina music was nurtured within her musical family in East Clare, an area renowned for its haunting music. In country farmhouses she learned her distinctive repertoire and relaxed, uncluttered style. The legendary P. J. Hayes of the Tulla Ceili Band had a major influence on her musical development.

Leo McCann originally from County Tyrone and now based in Scotland since 1992 plays the button box. He has played with Malinky and Iron Horse, recorded with Isobel MacAskill, and Tim O’Brien, and worked in theatre, e.g. ‘The Blind Fiddler’. Leo’s solo album is If Anyone Can.

Pip Murphy is one of the legendary Murphy brothers from County Wexford who learnt to play the mouth organ from his father, Phil. He is widely acknowledged as one of the foremost players of the instrument in Ireland.

Liam Robinson is a melodeon and concertina player, singer, organiser and educator, based in Lincolnshire, who has performed in North America and Europe. He specialises in the music and songs of Lincolnshire and the East Coast, and has recently released a CD of this material.

Tom Roche, originally from Mitchelstown, County Cork, but currently resident in Cruden Bay, Aberdeenshire, plays C#/D button accordion. He teaches and plays Irish traditional music and has played at several festivals throughout Scotland and beyond.

Michael Wright is an authority on the Jew’s harp in the British Isles. Passionate about the melodic possibilities of the instrument, he regularly teaches at festivals. He has recorded with the Wright Family as well as Dogan Mehmet, Matt Quinn and Sam Lee.

The Convention is directed by Dr Ian Russell and funded by Enterprise Music Scotland, the Friends of the Elphinstone Institute, Scottish Culture and Traditions Association (SC&T), the Wood Group, and the TMSA (Aberdeen Branch); and supported by the Blue Lamp, Celtic Chords, the Box Place, Hohner, the Aberdeen Salvation Army Citadel, Sutherland Trading, Suzuki, Lee Oscar, and Tombo.