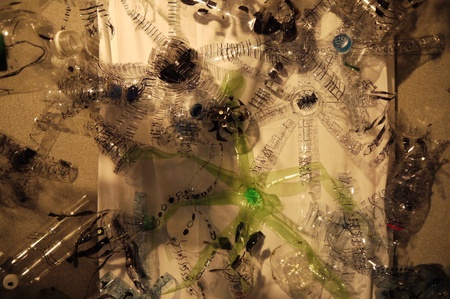 North-east schoolchildren showcased their environmental message to more than 1000 scientists this week at the World Conference on Marine Biodiversity in Aberdeen with an art installation demonstrating the problem of marine plastic.

These were then brought  together by Debbi to create a large installation which has been on display at the Aberdeen Exhibition and Conference Centre during the World Conference on Marine Biodiversity, running from September 26 to 30.

On display alongside the installation are winning and short-listed posters from a competition entitled Extreme Marine, which drew entries from more than 450 schoolchildren from across Scotland.

Young people from 20 schools from Shetland to Largs submitted their work to a panel of judges which included representatives from sponsor Britannia Operator Ltd and Scottish Natural Heritage.

Contributions were judged on both scientific and artistic content. Global warming proved the most popular topic - with the iconic polar bear featuring often. Pollution of our oceans by oil and plastic litter, and over-fishing, also caught the imagination of the pupils.

Marie Fish, Education Officer at the Natural History Centre, said she had been impressed with the energy and effort the young people have put into the various parts of the project, and their enthusiasm for giving strong messages on what they perceive as real and urgent threats to the environment and the future health of their planet.

“The pupils have shown real imagination, interest and understanding about the important issues confronting those who use and care for our oceans,” she added.

“They were also keen to suggest solutions – and we are delighted that their messages will be on display to catch the attention of the hundreds of scientists, industry representatives and policy influencers who are here in Aberdeen this week.”

The messages that the secondary children have voiced about plastic and pollution have also been developed by the Natural History Centre into workshops for  primary school children and have been presented at the AECC this week, receiving much interest from delegates.