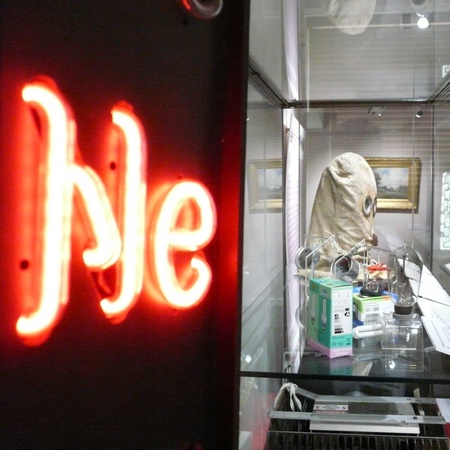 A new exhibition investigating the elements that make up our world has just gone on show at Aberdeen’s newest museum.

King’s Museum in Old Aberdeen is exploring different ideas about elements, from those understood by the Greek philosopher Aristotle - Air, Fire, Earth, Water - to those that modern scientists have found and recorded on the Periodic Table.

The elements of everyday appliances as well as those used in ancient times are also featured in the exhibition at the museum which is part of the University of Aberdeen.

Glassware made out of radioactive material and a lighting exhibit containing noble gases, such as neon, are also among the displays.

Neil Curtis, Head of Museums, said: “Not only does the exhibition reveal much about the changes in ways people have thought about the composition of the world, it also shows how our lives depend on many more elements than we expect.

“For example, neodymium is used for the powerful magnets in wind turbines, while energy-saving light bulbs contain rare earths like europium and terbium.

“Supplies of some of these elements are now critical, with supplies of only a few years left. With more and more elements being used for their differing properties, we cannot say which will become prized for their technological value and which will lead to conflict.”

The museum is free  and open weekdays between 10am and 4pm or 7.30pm on Tuesdays and between 11am and 4pm on Saturdays.

Alongside ‘Elements’, the popular exhibition ‘100 Curiosities’ continues to be on show. It displays 100 objects chosen by 100 different people from the university’s museum collections of almost 250,000 items.

Meanwhile Elements in King’s Museum will be open until January 2012.