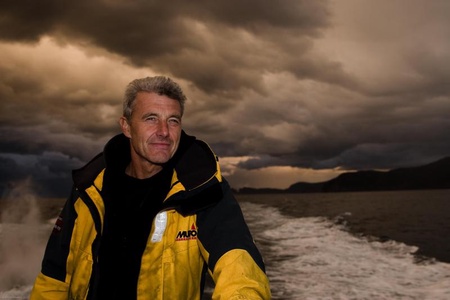 Paul’s colourful life has seen him exploring much of the world’s wild spaces, diving the seven seas, spend 10 years as base commander in the Antarctic and make several TV series, including BBC’s Ocean and the recent Britain’s Secret Seas.

The fantastic opening event of this year’s TechFest In September promises to be an evening of discovery, as Paul shares his own experiences and through his passion for exploration and conservation, explains his hopes for the future of our planet.

Paul will give his presentation at the Aberdeen Beach Ballroom on Friday, September 9, at 7.30pm. Tickets for the event cost £6 for adults and £2.50 for concessions and a booking fee will apply.

With more events, workshops and shows than ever, this year’s festival is set to attract around 25,000 visitors between September 9 and 27.

TechFest Director, Sam Cordiner, said: “Having Paul speaking at our opening event is a real coup for TechFest and I’m very excited that he’s agreed to come and share his experiences with us.  He has done so much in his life and seen so many things and I think the audience are in for a real treat.

“With events, workshops and shows across the schools and public programmes, there is sure to be something for everyone. One of our aims is to ignite an interest in the fields of science, technology, engineering and mathematics and encourage young people to go on to follow a career which utilises these skills.

“Our programme will demonstrate that these subjects are not only fun but crucial in determining how we live our lives now and in the future.”

Sponsored by joint principal funders Shell and BP, the festival is now in its 18th year.

One of the aims is to engage young people in the four main subjects of Science, Technology, Engineering and Mathematics and encourage themto go on to follow a career which utilises these skills by demonstrating that they are dynamic and fun and highly relevant in shaping how we live today.

Steve Harris, External Affairs Manager Shell Upstream Europe said: “By helping TechFest in September 2011 generate enthusiasm for the world of Science, Technology, Engineering and Maths subjects, we hope to provide an enjoyable experience for the public and an inspiration to the engineers, scientists, technologists and mathematicians of the future who are essential for the continued development of the oil and gas industry.”

Lynne Staples-Scott, BP’s Social Responsibility Manager, said: "TechFest In September is an excellent example of how the public, private and voluntary sector can work together to inspire the next generation of scientists who will be so vital for our future success. I am sure this year’s festival will be as successful as ever and look forward to enjoying some of the workshops and presentations on offer over the next few weeks.”

TechFest In September’s public programme ranges from loud and lively shows aimed at children to thought-provoking events for adults, featuring everything from zombie science, to forensics, wildlife crime, quantum physics and hip-hop.

Key highlights of Techfest In September include: