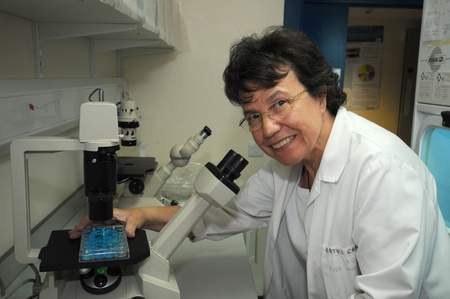 A new biotech company has been spun out of the University of Aberdeen to provide new ‘tools’ to help researchers trying to understand the biology and process of diseases that affect humans and animals.

Vertebrate Antibodies (VAb) Limited will produce and commercialise antibodies - which are created within the laboratory and mimic antibodies produced naturally in our own bodies - for life sciences researchers.

The antibodies will allow scientists to undertake new research and could also help with the development of new diagnostic and therapeutic strategies for the treatment of human and animal diseases.

The body’s immune system protects itself naturally from disease by producing antibodies which detect foreign proteins produced by harmful bacteria, fungi and viruses.

These antibodies detect proteins - which are the major component of the invading organism – and bind to those foreign proteins preventing the foreign invader from causing harm.

For more than 30 years scientists have exploited this clever mechanism to create man-made antibodies that can help in human health and research.

These tailor-made antibodiesact like a homing device detecting the presence of the specific protein of interest and are commonly used as ‘markers’ for specific diseases, such as cancers, where a particular protein is only expressed when a particular disease or condition is present.

As a result, antibodies created in the laboratory have become one of the most effective tools for advancing biological understanding, as well as revolutionising the development of therapeutic strategies and diagnostic tests.

However to date the focus has been on human health and little has been done to develop antibody tools for use in other species of animals.

Over the last two years, a trio of researchers at the University of Aberdeen – fish immunologist Steve Bird, experienced antibody developer Beatriz Cash and biotech commercialisation expert Ayham Alnabulsi - have honed the technique of antibody production to make it cost effective, less complicated for researchers and applicable to a range of different animals as well as people.

VAb will continue to work towards developing antibodies for human research but will provide a more extensive service for researchers working in animal health.

Now the VAb team is keen to raise awareness through the life sciences community of the new tools and services they can provide.

Dr Bird, one of the founders of VAb said: “As researchers ourselves, we have inside knowledge of the needs of colleagues working in research institutes, universities and the biotech and pharma industries worldwide.

“We are also taking advantage of all the history, current strengths, and amazing teams of bioscientists working at Aberdeen and across Scotland and believe we are ideally placed to build long term relationships across the sector’s research and development community worldwide.

“The tools we produce will have a massive impact on the research which today is underpinning the development of new drugs and therapies, which has enormous economic as well as health benefits.

“We are already talking to colleagues working in veterinary, agricultural and aquaculture research and management, about their priorities, and how we can develop the species-specific antibody tools they desperately need for their valuable research.”

The company is being supported by a private investor, Mr Mohamed Saleh, an engineer and entrepreneur with investments within the Middle East, who said: “VAb is within a niche that remains largely unexploited and represents an exciting opportunity for future growth.

“Additionally, I have a strong network of collaborators within the Middle East & North Africa where research is expanding and these links will help strengthen VAb's future prospect.”

Welcoming the launch of the new spinout company, Professor Stephen Logan, Senior Vice-Principal of the University and himself a bioscientist commented: “I am delighted to see this further example of exciting new research honed in laboratories at the University of Aberdeen and now to become available to research colleagues working in other universities, institutes and biotechnology companies which are working to improve human and animal health. I wish Vertebrate Antibodies every success.”

Vertebrate Antibodies will operate from the University’s College of Life Sciences and Medicine, and more information is available here http://www.vertebrateantibodies.com/.