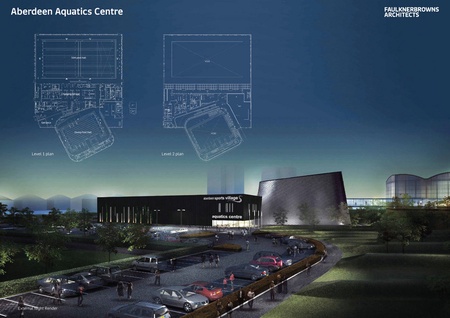 The creation of a state-of-the art aquatics centre in Aberdeen has taken a major step forward with the appointment of a contractor to deliver the project.

The Centre will be the next phase of the Aberdeen Sports Village development, building on the success of the £28 million regional sports centre which opened in August 2009 and is a partnership between the University, sportscotland and Aberdeen City Council.

It will provide long course training opportunities for elite swimmers who currently have no facilities north of Stirling and provide a community facility that will encourage participation in water-based activities at all ages and abilities.

Following a comprehensive tendering process, GRAHAM Construction have now been selected to build the Aquatics Centre, which will include a 10 lane 50m pool, diving facilities and spectator seating for 600 people.

GRAHAM Construction have a strong track record in delivering high quality leisure facilities and are in the final stages of completing the refurbishment of the Royal Commonwealth Pool in Edinburgh.

The contractor has also completed the extensive refurbishment of the Grade B listed Maryhill baths which were first opened in 1898 and had lain derelict for over 20 years, the construction of the Pleasance Sports Complex for the University of Edinburgh and other prestigious projects across all regions of the UK and Ireland.

“GRAHAM are the final stages of completing the refurbishment of the Royal Commonwealth Pool in Edinburgh and has completed a number of other sports facilities across Scotland, and will bring the expertise needed to ensure that the Aberdeen Aquatics Centre is delivered to the same high standards.”

Neil McFarlane, Regional Director at GRAHAM Construction said: “This is a tremendously important project for GRAHAM and we look forward to starting work on the Aquatics Centre.

“Projects such as this demonstrate that GRAHAM are a major contributor to the Scottish construction industry and we are pleased to be involved in the delivery of a first-class sporting facility for Aberdeen, which will be warmly welcomed by Scotland’s top swimmers and the local community alike.

"We have significant experience of building leisure facilities around Scotland and as our first major contract in Aberdeen, the new Aquatics Centre is a project we are very proud to be delivering.”

Nick Dalgarno, Chair of the ASV Aquatics Working Group, welcomed the appointment of GRAHAM and added:  “We can now commence on the detailed planning with the design team and contractor with a view to starting work on site later in the summer.   It is an exciting time for sport in the UK and we are delighted that our partners have had the vision and commitment to ensure that this once in a lifetime opportunity can become a reality.”

Full planning permission was granted for the centre, which will be on the site of the former Linksfield Academy, in October and work is expected to begin on site in August 2011.