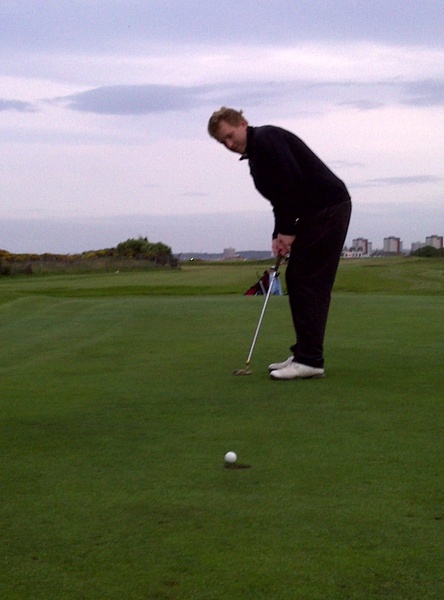 A University of Aberdeen law student is to represent Europe in the collegiate version of golf’s Ryder Cup.

Second year student Nick Macandrew will become the first person from the University to compete in the Palmer Cup, which will see Europe take on America at Stanwich Country Club in Connecticut.

Nick, 19, will follow in the footsteps of Luke Donald, Graeme McDowell and Ben Curtis, who have all competed in the Cup, named after golf legend Arnold Palmer.

The Palmer Cup began in 1997 and has a Ryder Cup-style format bringing together the top eight collegiate players in the United States against their counterparts from Europe.

The former Aberdeen Grammar School pupil will fly out to New York on Sunday (June 5) and games will be played from June 9-11.

Nick has been supported in his training by the Aberdeen Future Fund and was awarded £500 to help cover the cost of coaching prior to the event.

The Aberdeen Future Fund allows graduates to make regular, smaller gifts to the University.  The money that is raised is used to support the University's major campaign projects, scholarships, sports bursaries and study support grants.

Nick, who took up golf at the age of eight and is a member of Royal Aberdeen Golf Club said he was honoured to have been selected for the Palmer Cup team.

“It’s a great opportunity for me to be competing alongside some of the world’s best collegiate golfers and I know I’ll learn so much from the week. I’d like to thank the University of Aberdeen and the R&A for their support of both my studies and golf.”

The Palmer cup is traditionally dominated by US based players with its strong National Collegiate Athletic Association (NCAA) golf programmes and Nick is the only member of either side who does not currently attend university in America.

He is also the only British player in the Europe team made up of five Swedish players a Spaniard and a Dane.

Nick was selected for the team on the back of his win at the 2011 win at the R&A Foundation Scholars Tournament in St Andrews, where he claimed an emphatic seven-shot victory.

Professor Ian Diamond, Principal and Vice-Chancellor of the University of Aberdeen congratulated Nick on his selection.

He said: “Nick has overcome fierce competition to win his place in the European team for the Palmer Cup and the University is delighted to support him through the Aberdeen Future Fund.

“We wish him and the rest of the team every success for the tournament and win or lose I’m sure this will be a memorable moment in his golfing career.

“Nick has juggled his sporting commitments with the rigours of a law degree and is a credit to the University of Aberdeen.”

The Aberdeen Future Fund allows graduates to make regular, smaller gifts to the University.  The money that is raised is used to support the University's major campaign projects, scholarships, sports bursaries and study support grants.  It also enables us to provide immediate, responsive support where it is needed most.  We have also awarded funding to a variety of student clubs and societies including the Sports Union, Societies Union, Gaudie, ASR and TAU Racing.