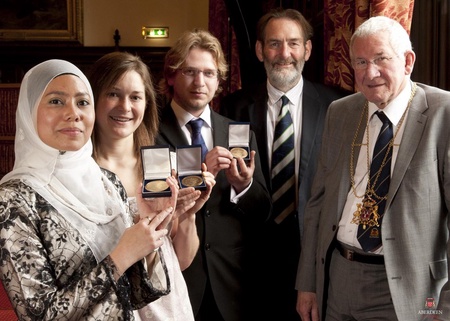 A gifted musician, an outstanding triathlete and a multi-talented medical student who helps Islamic students to settle in Aberdeen have been honoured by the University.

The students were each presented with a £1000 cash prize and medal in honour of their achievements by the Lord Provost of Aberdeen, Peter Stephen, at a ceremony held at the Aberdeen City Council Town House.

The ceremony was also attended by Professor Ian Diamond, Principal and Vice-Chancellor of the University of Aberdeen.

Former Aberdeen Grammar school pupil Edward, 22, is in the final year of a Bachelor of Music degree and is on course to obtain First Class Honours.

He dedicates much of his time to conducting music groups and has led the Deeside Choristers for four years, building them into an important group within the north-east of Scotland, conducts the University of Aberdeen new Music Group and is assistant conductor of the University’s Opera Society.

Edward is active nationally and internationally with choirs and ensembles performing with the Edinburgh Chamber Choir in Prague, Canterbury and Vienna. He also gives up his time freely to accompany fellow students at musical events around Scotland.

Edward will stay on at Aberdeen to begin his doctoral studies in composition.

Natasha, 24, originally from Galashiels, is in her final year of medicine and took up the triathlon in 2008.

She has gone on to compete at the World Duathlon and Triathlon Championships and last year won the North of Scotland Senior Female triathlon (standard distance).

Natasha took an intercalated degree in Sports Science between the fourth and fifth year of her medical degree and was awarded a First. She also finds time to work as a Nurse Bank Auxiliary at Aberdeen Royal Infirmary which enables her to see many aspects of patient care often hidden from a medical student’s perspective.

In addition to her sporting and academic achievements, Natasha is an accomplished saxophonist reaching Grade 7 level and has undertaken volunteer work with a number of charities, including the Haven project run by Aberdeen City Mission, over the summer holidays.

Aizaan, 25, is also in the final year of a medical degree and has already been named Scotland’s International Student of the Year 2011 in a prestigious competition organised by the British Council.

Originally from Malaysia, she won the title having shared her inspirational story about life as a student in the UK where, in addition to her medical studies, she won the Calder Prize for Poetry awarded by the University in 2009, enrolled in French night classes and took Spanish lessons – scooping the Elizabeth Lockhart Prize in Languages for being the best student in the class.

Aizaan is a keen fiddle player and has helped organise a tour with her ensemble to raise funds for various charities. She has also worked to advise the Medical School how best to improve induction arrangements for other overseas Islamic students to make it easier for them to fit into a different culture and to raise awareness of the difficulties they may face.

“Today’s ceremony honours these three prizewinners whose high educational performance combined with a real dedication to the wider community make them strong examples of the high calibre of exceptional graduates being produced by the University.”