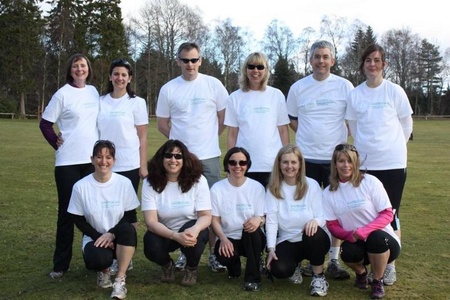 Runners raising money for a local cancer charity have dedicated their donation to an Aberdeen patient who lost his fight with gullet cancer.

Before he died Nick and his wife Janice raised £3,000 for the Grampian Gastroeosphageal Cancer Research Fund or GASTROCAN, set up at the University of Aberdeen by Nick’s oncologist Dr Russell Petty to support local research work.

Now two other groups of fundraisers who ran the Balmoral Run to raise cash for GASTROCAN have decided to dedicate their donations to Nick.

Residents from Banchory, who called themselves Team Banchory, have raised almost £5000 for the charity, while Gwen Moran, a work colleague of Janice, has raised almost £1,000 by running the race for GASTROCAN.

Laura Tulloch, Fundraising Co-ordinator for GASTROCAN and a member of Team Banchory, said: “The amount raised exceeds all our expectations. GASTROCAN would like to thank all those who took part for their hard work in obtaining sponsors and in particular, thank the public for their generous support. It seemed appropriate that our donation should be in the memory of Nick Cook who helped raise money and the profile of GASTROCAN.”

Dr Petty, Consultant Medical Oncologist at NHS Grampian and a Clinical Senior Lecturer at the University of Aberdeen, who specialises in the treatment of gastro-oesophageal cancer and leads University and NHS Grampian research into the causes and treatment of the disease, said: “Nick was an inspirational patient who despite being gravely ill took the time and effort to raise money for GASTROCAN.

“Nick and Janice did a tremendous job and Nick’s memory will live on with some of the research the couple were kind enough to help support.

“These latest donations from Team Banchory and Gwen Moran are a tremendous boost and a fantastic effort by all the runners, because in addition to raising money for much needed research, they have also been able to raise public awareness about stomach and gullet cancer which is very important.”

GASTROCAN is the only charity that raises money specifically for research into stomach and oesophageal cancer.

A patient with breast cancer has an eight out of 10 chance of completely beating the disease, compared with just one in 10 gastro-oesophageal cancer patients.

Donations are still coming in for Team Banchory and Gwen Moran. Anyone else keen to add their support can go to: