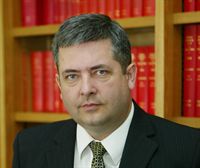 A University of Aberdeen graduate is to become Scotland’s most senior law officer.

Frank Mulholland QC, who gained an LLB at Aberdeen in 1981 and was awarded a Diploma in Legal Practice in 1982, was appointed by First Minister Alex Salmond as Solicitor General four years ago and will now be promoted to Lord Advocate.

The Lord Advocate, assisted by the Solicitor General, heads the country's system of criminal prosecution and leads the investigation of deaths.

Mr Mulholland succeeds Elish Angiolini QC, who announced plans to step down last year.  Ms Angiolini was the first woman to become Lord Advocate and was the first solicitor to hold the post.

She also has connections to the University – she was awarded an Honorary Doctor of Laws degree from Aberdeen in 1996 and will become an honorary professor in the School of Law.

Mr Mulholland was born in Coatbridge in 1959 and attended Columba High School before embarking on his studies at Aberdeen. On completion of his Diploma in Legal Practice he commenced his traineeship with Bird Semple & Crawford Herron, Solicitors, Glasgow.  He later gained an MBA from the University of Edinburgh.

On qualifying in 1984, he joined the Procurator Fiscal Service as a depute in Greenock.  He also served as a depute in Glasgow and Edinburgh, and worked in both the High Court and Appeals units at the Crown Office.   His work at the Crown Office included prosecuting high-profile cases, such as the Craig MacDonald murder in Wishaw in 1996 and the Imran Khan murder in Shawlands two years later.

In 1997 Frank Mulholland became the first Solicitor Advocate and member of the Procurator Fiscal Service to be appointed to office of Advocate Depute.  As an Advocate Depute Mr Mulholland prosecuted Transco Plc for health and safety breaches in relation to the deaths of the Findlay family in Larkhall. Prior to the start of the trial he worked closely with colleagues in Hamilton Fiscal office, the Health and Safety Executive and Strathclyde Police in preparing the case, and maintained close links with them throughout the six-month long trial.  In August 2005 Lord Carloway handed down a record fine of £15m.

Frank Mulholland earned the rank of Queens Counsel in 2005, one of the first solicitor-advocates employed in criminal work to achieve that. The following year he was awarded a diploma in trial skills from Harvard University.

Frank Mulholland was appointed by the First Minister, Alex Salmond, to succeed John Beckett as Solicitor General for Scotland in 2007 and will now be promoted to Lord Advocate.

Margaret Ross, Head of the School of Law at the University of Aberdeen, said: “The School of Law is immensely proud to congratulate the new Lord Advocate on this historic appointment, a first for an Aberdeen LLB Honours graduate.  We are also delighted that his predecessor, Elish Angiolini has agreed to join us as an Honorary Professor.  They have both demonstrated great interest in the work of the Law School and are exemplary role models for our students.”

Other notable Aberdeen alumni among appointees announced by the First Minister today (May 20) include:

Minister for Learning and Skills (with responsibility for Gaelic & Scots)

Minister for Environment and Climate Change