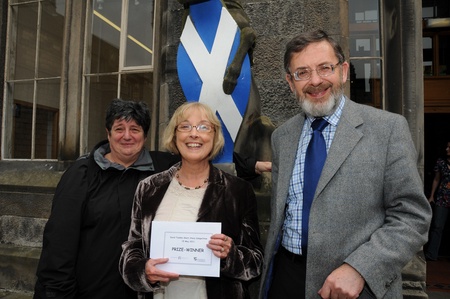 A retired teacher from Kintore has taken a major step forward in forging a new literary career after scooping the 2011 Toulmin Prize for her short story The Last Een.

Linda Smith’s tale of the last member of a large north-east family reliving memories of days gone by was announced as the winning entry at the Word Festival in Aberdeen.

In addition to the cash prize, Linda’s story will be published in the Leopard magazine and subsequently featured on the website of the Scots Language Centre.

She was presented with the Toulmin Prize at a special event at Word – the University of Aberdeen Writers Festival – on Sunday (May 15) where her story was read by local poet novelist and storytella Sheena Blackhall.

The Festival is a three-day mix of readings, debate and discussion and featured appearances form the acclaimed Canadian novelist Margaret Atwood, Scotland’s Iain Banks and newscaster John Suchet who spoke about his book My Bonnie: How dementia stole the love of my life, a moving account of his wife’s battle with dementia.

Linda, 62, of Gauchhill Road, Kintore, said she was delighted to receive recognition for her work.

The a former Turriff Academy guidance teacher, added: “When the envelope came through the door to tell me that I had been selected as the winner of the 2011 Toulmin Prize I was so overcome that I couldn’t speak.

“I’ve had some work published in the Leopard magazine and Pushing Out the Boat but nothing on this level.

“I’m absolutely thrilled that The Last Eeen was chosen as the best entry.”

Dr Ian Russell, Director of the Elphinstone Institute, said: "We are proud to have been able to honour John and his work in this way and delighted to see Linda take the 2011 Toulmin Prize. We received some very strong entries but Linda’s tale really stood out and was a very worthy winner."

*John Reid (1913-1998) was an Aberdeenshire farm labourer from Rathen, Buchan, who spent most of his life working long hours for very small rewards. In odd moments he jotted down short stories, character studies, and bothy tales.