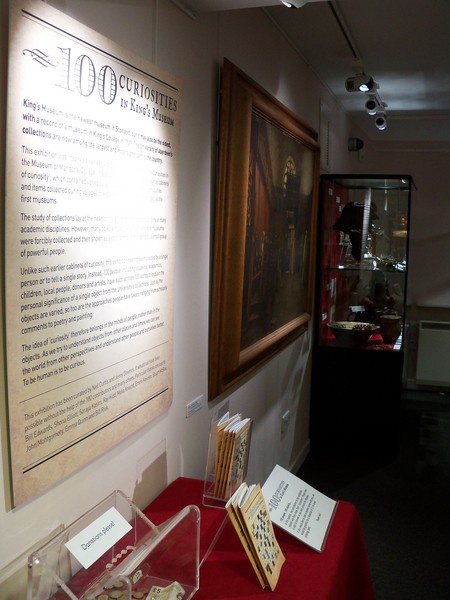 Word festival-goers will have an opportunity to explore Aberdeen’s newest museum as it throws open its doors for a special Night at the Museum event.

The King’s Museum is one of four University of Aberdeen museums offering the opportunity to see the collections at a time when doors would usually be locked.

Taking inspiration from the blockbuster Hollywood film, visitors can view exhibits ranging from owls and bats in the Zoology Museum, to small figures in a Javanese musical procession , a padlock from an Aberdeenshire mort-safe and a stone statue of the Hindu god Ganesh in King’s Museum to see for themselves how night time changes the feel of the museums.

It is the third time the event, which is part of a Europe-wide movement, has been held in conjunction with Word – the University of Aberdeen’s popular literary festival running from May 13 to 15.

Four places in the University will open specially during Saturday evening from 6pm to 10pm - the Zoology Museum, the new King’s Museum, the Old Town House and King’s College Chapel.

In King’s Museum visitors can see “100 Curiosities”. This exhibition displays objects chosen by a hundred of the museum’s friends. Each person has chosen an object that has a personal resonance and has written a caption of 100 words to explain its significance. These include scholars who have selected an object that relates to their own research, such as a historian who chose a Renaissance coin minted in Aberdeen, a zoologist who selected a set of shark jaws, and a geologist who chose a trilobite fossil.

At the Zoology Museum there will be science workshops, a free showing of Night at the Museum 2: Battle of the Simthsonian at 7pmwith face-painting and science workshops from 6.30pm to 9.30pm as well as the opportunity to visit the exhibitions throughout the evening. Across the road in the Hub, visitors during the early part of the evening will be able to have a cup of coffee and cakes to refresh them for the remainder of the evening.

The evening will also see the opening of a new exhibition in the Old Town House by Scottish author and artist Alasdair Gray, who will appear at Word on Sunday, of original works relating to his famous novel, Lanark.

Neil Curtis, Head of Museums said, “Although we have been taking part in the Night of Museums event for a number of years, this is the first time that we have been able to open such a wide range of places. It is particularly exciting to be able to welcome visitors to the newly opened King’s Museum.

“Last year more than 1,000 people came to see our exhibits at night and we are expecting strong interest again this year, particularly in the new museum.

As well as forming part of the Word festival, the event also coincides with the Festival of Museums – a new festival to celebrate Scotland’s wealth of culture running from May 13-15, with museums across the country taking part in events both day and night. The Festival of Museums is about museums working together to celebrate Scotland’s living culture while simultaneously highlighting to people how museums and galleries offer great-value days out, year round - http://www.festivalofmuseums.com/