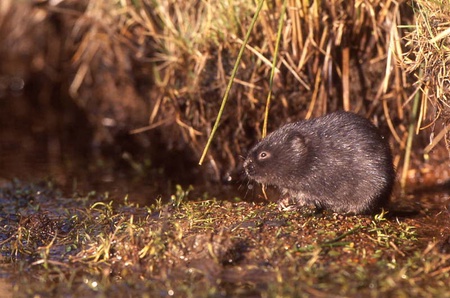 The largest ever initiative to remove breeding American mink from north Scotland is now underway, it was announced today (12 May 2011).

Covering 20,000 km², from rural Tayside across Aberdeenshire, Moray, the Cairngorms and the Highlands, the Scottish Mink Initiative is a new partnership project between Rivers and Fisheries Trusts of Scotland (RAFTS), Scottish Wildlife Trust, Scottish Natural Heritage (SNH), the University of Aberdeen, and 16 other organisations.

Aiming to protect native wildlife, such as water voles, ground nesting birds and economically important populations of salmon and game birds, to help protect local economic stability for the benefit of local communities, the project signals a £920,000 investment in native wildlife conservation, thanks to support from Cairngorms National Park Authority, Highland, Moray, Rural Aberdeenshire and Rural Tayside LEADER 2003 - 2007 Programmes and SNH through the Species Action Framework.

Hollie Walker, the Scottish Mink Initiative Project Coordinator, said:  “This project is as much about ensuring economic security for local communities as it is about protecting Scotland’s wildlife.  By taking action now to prevent mink from continuing to impact negatively on our native wildlife, we are also safeguarding local economies and livelihood’s which depend on angling, shooting, or wildlife tourism.

“The success of this project relies on community support and involvement, and we hope that by working with homeowners, landowners, river trusts and boards, and local interest groups, we can deliver real, tangible results to benefit local communities now and in the future.

“We have now appointed four project officers and we will be strategically working at a local level to monitor mink movements using mink rafts and establish an alert system, made up of local land owners, fishery trusts, volunteers, and interested others, to prevent further spread of the species.  While animal control will be necessary, animal welfare considerations will be paramount to our operations.”

With its aim to create a 20,000 km² safe haven free from breeding mink, the Scottish Mink Initiative significantly builds on the success of previous mink control projects in the Cairngorms National Park, Highlands and north east Scotland.

The project will establish a strategic monitoring and control zone across the north, extending from the mid-Tay to the South Esk, around the east coast to the River Nairn, and across from Dornoch and Cromarty on the east to Ullapool on the west.

1.    The Scottish Mink Initiative is a partnership initiative between Rivers and Fisheries Trusts of Scotland (RAFTS), Scottish Wildlife Trust, the University of Aberdeen, Scottish Natural Heritage, and more than 16 other organisations.  The three-year initiative aims to protect nationally significant populations of water voles, salmonids, ground nesting birds, and other riparian biodiversity by establishing a sustainable management framework to create and maintain an area free of breeding mink in northern Scotland.

The Species Action Framework, launched in 2007 by Ministers, sets out a strategic approach to species management in Scotland. In addition, 32 species have been identified as the focus of new management action for five years from 2007.  SNH works with a range of partners in developing this work and further information can be found at www.snh.gov.uk/speciesactionframework

5.    The University of Aberdeen has been at the forefront of teaching, learning and discovery for 500 years. Our research addresses many of today's global challenges and brings together world leading scientists from different disciplines to tackle issues such as environmental sustainability.

6.    Scottish Natural Heritage is the Government's advisor on all aspects of nature and landscape across Scotland. Our role is to help everyone understand, value and enjoy Scotland's nature now and in the future. For further information visit our website at www.snh.org.uk

7. SNH is a principal funding partner of the project which represents a key element in a wider strategic approach to mink control developed by SNH and summarised within the Species Action Framework Mink Implementation Plan.  It forms the largest project of its type anywhere, encompassing numerous river catchments at which systematic control will take place.