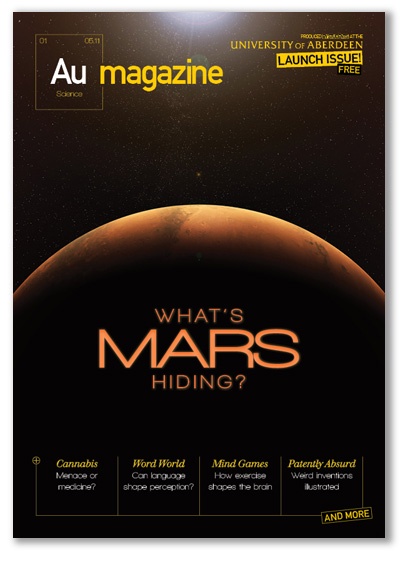 Written, produced and edited by undergraduate and postgraduate research students from the University of Aberdeen, Au Science Magazine presents articles on internationally topical scientific issues, with a primary focus on scientific research conducted at the University.

The University of Aberdeen has a long-standing tradition of high quality scientific research, and Au Science Magazine aims to present this research in a fun, dynamic and tangible way.

Heather Doran, Editor of Au Science Magazine, explains: “There's so much fantastic science that goes on in Aberdeen we just felt we wanted to share it with the city. We wanted to give students a chance to express what they think is exciting - giving it a fresh and different angle to how science stories are usually written.”

The student Science Journalism Society comprises over 25 undergraduate and postgraduate students studying biological sciences, geology, anthropology and other science disciplines, who share a passion for enthusing and engaging a wide audience with science .

The first issue of Au Science Magazine looks at the mystery of Mars, asks whether earth is running out of room, debates ‘geek chic’, joins a muddy starling-watcher in the field, meets a cosmic comic and asks what happens in our brains when we’re at the gym.

The magazine takes a multidisciplinary approach, inviting commentary from different scientific disciplines and wider fields across all three colleges at the University. It hopes to serve as a platform to showcase extensive research conducted across the Iniversity as well as stimulating interest, discussion and commentary from both academic and non-academic contributors.

Professor Ian Diamond, Principal and Vice-Chancellor at the University of Aberdeen  praised the work of the editorial team and the quality of the new magazine, saying:  “I think this is a terrific new publication. I feel great pride that our University is producing a new generation of talented young scientists who are committed to enthusing and engaging a wide audience with the wonders of science and the path-breaking research taking place in this area.

“I wish Au Science all the very best, and I look forward to it contributing to the growing role of north-east Scotland as a leader in engaging our communities and businesses in research which is tackling some of the biggest issues facing the world today.”

Au Science Magazine will be published three times a year, to coincide with significant events in the university calendar.  Copies are  free and will be available at the Waterstone’s book stand at this weekend’s WORD festival on the King’s College campus. Following the WORD festival the magazine will be distributed across the University campus and throughout Aberdeen, including Waterstone’s branch at Union Bridge.

Publishing costs are being supported by a Science Engagement Grant from the Scottish Government and the Principal's Excellence Fund.

The magazine is also available online at http://www.aumag.co.uk/