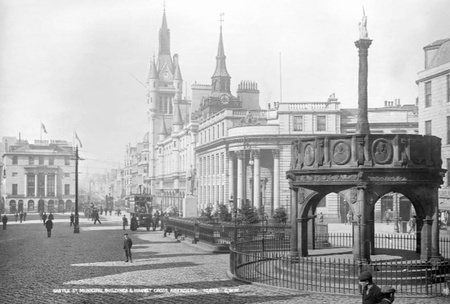 A new film created by students at the University of Aberdeen and inspired by iconic images taken by the great Aberdonian photographer George Washington Wilson is to be screened to the public on Tuesday (May 10).

The 50-minute film, entitled, 'Panoptic Aberdeen', will be shown free at Cineworld Union Square at 7pm and is open to the public.

It was created by Honours students in the University's Film and Visual Culture programme, who made use of the facilities in the new Media Lab and the extensive collection of George Washington Wilson photographs held by the University’s Special Collections and recently made available in high quality online.

Born in the North East of Scotland, George Washington Wilson (1823-93), became established in Aberdeen in the 1850s as an 'artist and photographer'. Wilson took his camera all over Britain and the colonial townships of South Africa and Australia, as well as the western Mediterranean and the collection includes more than 35,000 images – many from the north-east.

At its height, Wilson's Aberdeen-based company was one of the largest mass producers of photographic images in the world.

Dr Alan Marcus, head of the Department of Film and Visual Culture at the University of Aberdeen, said: "Aberdeen is in many ways a unique urban setting, with its ancient harbour filled now with massive oil support vessels, and being a prosperous city built exclusively of granite.

“Using key Wilson photographs of Union Terrace Gardens, the docks, Castlegate and other areas as a starting point, the film explores how those spaces look today, and more importantly how Aberdonians are using and transforming this urban terrain some 120-150 years later.  We haven't seen this style of visualization done before in Aberdeen and it has produced some unexpected results.

He added that Wilson was a leader in his field – using the most up-to-date technology of the time to capture images from around the world - and that students had embraced the technology of today’s society to create the film.

"We are being constantly reminded about the surveillance society in which we now live", Dr Marcus said, "What the students have done is to borrow the visual language of the CCTV camera and translate it in an enhanced high cinematic style to gaze upon our city with an ethnographic alertness."

The budding filmmakers have been inspired by recent high profile visitors to Aberdeen appearing on the University's popular Director’s Cut series of public talks, with recent guests including Gurinder Chadha, who directed Bend it Like Beckham and Kevin Macdonald, famous for Last King of Scotland and The Eagle.

Steve Buchan, Cineworld Union Square General Manager, said: "We are really pleased to be associated with this exciting new film work being done at the University of Aberdeen and are delighted to be hosting this event for the students and members of the public".

Further details of the film and its screening can be found on the University's Film Department web site at: http://www.abdn.ac.uk/film