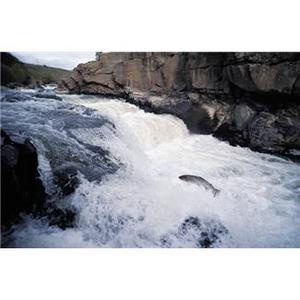 The perils facing the fish whose home is around Scotland's coast and waterways will be the theme for Aberdeen scientists' involvement in a European day of action next month.

The perils facing the fish whose home is around Scotland’s coast and waterways will be the theme for Aberdeen’s involvement in a European day of action next month.

Once known for its rich fish population, the North Sea is now suffering from intensive fish practices, and rivers connected with the North Sea are blocked with man-made barriers. Many fish species migrate between seas and rivers to fulfil their lifecycle, such as sea trout, salmon, sturgeon and eel. These species are particularly threatened by barriers such as weirs, dams and sluices, built for water management, hydropower and land drainage. If the cycle is not complete they will become extinct. This has already happened in many places around the North Sea.

As part of international action to raise awareness of this issue and what can be done to address it, scientists at the University of Aberdeen’s Institute for Coastal Science and Management are encouraging organisations and the public to get involved in a pan-North Sea Fish Migration Day on Saturday 14 May. Activities, which will be in partnership with Aberdeen City Council, will be held at Torry Battery in Aberdeen, and information will also be distributed at Union Square shopping centre in Aberdeen.

Organiser Dr David Green said: “This is a critical time for our native fish stocks. If nothing changes, more species will disappear. As North Sea nations we need to take preventative action to facilitate free fish migration, including, where necessary, fish-friendly barriers across regions around the North Sea.

“To raise awareness we are joining colleagues in six other countries around the North Sea in holding this Fish Migration Day to raise awareness of this critical issue. At each location organisers will provide a fun-packed activity day for our communities, to help them understand more about the plight of fish in our rivers and around our coast.

“We aim to achieve greater understanding and community involvement in helping fish move freely around North Sea coasts and rivers. The day will be educational and will feature a variety of topics including different species of fish, fish passage solutions, water and nature management issues, fisheries, research and aquatic insects. Among the many activities will be a link-up with other Fish Migration Day activities in Europe, English versions of the eel game and ‘identify that fish’, river boat trips, fish face painting, talks and walks, giveaways and plenty of delicious fish nibbles to try.”

The awareness day is part of the Living North Sea project, a six million euro EU project funded by the European Interreg North Sea Programme. This European collaborative project has 15 partners around the North Sea focusing on raising awareness, educating, and influencing people and policy about the plight of fish migration from sea to source.

More information is available at