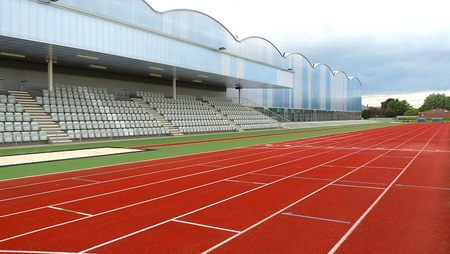 A Scottish Olympic champion will inspire the next generation of north-east athletic talent when he officially opens the Hydrasun Athletics Academy based at Aberdeen Sports Village on Friday (May 6).

Allan Wells, who took Gold for Great Britain in the 100m at the 1980 Moscow Olympics will perform the honours for the Academy, which aims to nurture talented athletes aged 17 to 23 by providing access to top level facilities and coaching.

Sponsored by Hydrasun, the Academy is managed by three partners Aberdeen Sports Village, the University of Aberdeen and the charity, Blue Horizon.

The University of Aberdeen Sport and Exercise Team support the young athletes with strength and conditioning training and they also have access to the ASV based SPEAR clinic providing help with physiotherapy, sports medicine, podiatry, sports massage therapy and nutrition.

At the helm of the Hydrasun Athletics Academy is ex-professional sprinter and track and field coach from the 2008 Beijing Paralympics team, Eddie McKenna, who is also a Director of charity partner, Blue Horizon.

The innovative partnership has already gained support from established athletics bodies and patrons and it is hoped it could provide the key to ensuring talented athletes reach their full potential.

Nigel Holl, Scottish Athletics Chief Executive said: “This initiative is exactly what we need to see supporting our sport at local and regional level. The partnerships that have formed to provide athletes in and around Aberdeen and Grampian with enhanced opportunities are excellent - proof that local initiative can combine to raise the flag as well as the bar for athletics in this area. Scottish Athletics is delighted to support this initiative, and I know that it will help many young athletes on the pathway to international success."

The Hydrasun Athletics Academy currently has 17 athlete members and during the Academy’s first six months they have already achieved some impressive results including race wins, setting Personal Bests and being ranked within the top six in the UK for their distance.

Bob Drummond, Hydrasun Chief Executive added “We are delighted to be able to support the Athletics Academy.  The Academy is the result of the commitment and vision of Eddie McKenna and the managing partners to create a programme that provides young talented athletes with development opportunities and support to reach their full potential.  This strategy is strongly supported by Hydrasun and we are pleased and excited to be part of it and look forward to the many athletic success stories it will help to create.  Our collective dream is to bring a Gold Medal back to the North East by 2016!”

David Beattie, General Manager of Aberdeen Sports Village, said: “With the London Olympics in 2012, Glasgow Commonwealth Games in 2014 and thereafter Rio Olympics in 2016, there has seldom before been such an opportunity to support our future athletic stars to enable them to reach their full potential and perhaps go on to represent their country at a world class level.  The coordination of the world class facilities at the Sports Village, with the Hydrasun Academy, provides a real focus for local talent and is a real asset to the North East.”

The official launch of the Hydrasun Athletics Academy will take place on Friday May 6 2011 at 1pm.  Launching the Academy are special guests Allan Wells, Brian Whittle and Nigel Holl.

As part of the Academy and with the support of Hydrasun, athletes receive a range of free services including access to Aberdeen Sports Village facilities, strength and conditioning courses from the University of Aberdeen, physiotherapy services from Spear Physiotherapy, nutritional advice, training plan development and financial support to offset travel costs to events.  Admission is based on current Scottish Athletics criteria for development athletes.

In addition to becoming major sponsor of the Hydrasun Athletics Academy, the move, which happened during January 2011, demonstrates the company’s commitment to Aberdeen and the North East.

Eddie McKenna is Performance Manager of the Hydrasun Athletics Academy and has been instrumental in the establishment of it.  Eddie is also a Director of charity partner, Blue Horizon, an ex-professional sprinter, a qualified UK Athletics Sprint Coach and was Aberdeen Sports Council's "Coach of the Year", 2009.

In 2008 Eddie had the prestigious role of being one of three staff track and field coaches with the 35-man squad at the Beijing Paralympics.  He personally coached medal hopeful Neil Fachie prior to his successful transition to Disability Cycling in which he is now double world record holder

He is Scotland’s most successful Commonwealth athlete of all time.  Wells's personal best for the 100 metres is 10.11, and for the 200 metres is 20.21, run at the Moscow 1980 games, and both are still Scottish records.