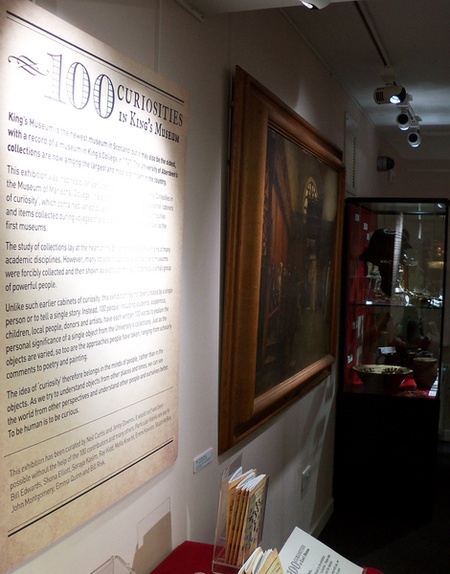 A new museum in the heart of Old Aberdeen, opposite the historic King’s College Chapel, will open today (Monday April 18).

Although this is Scotland’s newest museum, it may also be the oldest as its origins lie in a museum collection in existence in King’s College in 1727.

By the end of the 18th century King’s College and Marischal College both had established museums, with their purpose-built galleries forming an important part of the 19th century buildings of the colleges.

Today, the University of Aberdeen’s museums are among the largest and most important in Scotland, having been awarded the status of a ‘Recognised Collection on National Significance’. King’s Museum will have a programme of exhibitions that will change every few months to show some of these collections.

The collections reflect the activities of generations of students, staff and friends of King’s College, Marischal College and University throughout its history. This includes hundreds of thousands of scientific specimens collected as a result of scientific research, such as those in the geology, anatomy, pathology, herbarium and zoology collections, many of which are on show in the university’s Zoology Museum.

The museum’s exhibitions will also enable students and staff to collaborate with museum staff to curate exhibitions that will bring the results of recent research to a public audience. With an educational programme for schools, the museum’s evening lecture programme and other events, such as the annual ‘Night at the Museum’, the museum will therefore become a place where objects and ideas can be explored in many ways that would have been inconceivable to those who have collected and curated the collection over the past centuries.

Neil Curtis, Head of Museums at the University of Aberdeen, said: “As well as showing some of the highlights of the university’s collections, the museum will be a place where a wide variety of people can engage in some of the latest thinking in the university. We hope that the museum will become a friendly place, where passers-by, students, staff, tourists, can drop in for a break and look at something interesting; a place of stimulation and reflection in the middle of the busy campus.”

The opening exhibition will be titled “100 Curiosities”. It is inspired by the ‘History of the World in 100 objects’ project of the British Museum and BBC, but also the title of an early 19th century catalogue of ‘the principal curiosities natural and artificial preserved in the museum’.  Rather than being selected by a single curator, however, this exhibition has relied on a hundred of its friends to select the objects to be displayed. Each person has chosen an object that has a personal resonance and has written a caption of 100 words to explain its significance. These include scholars who have selected an object that relates to their own research, such as a historian who chose a Renaissance coin minted in Aberdeen, a zoologist who selected a set of shark jaws, and a geologist who chose a trilobite fossil.

Mr Curtis added: “The importance of working across disciplines is seen in a number of cases, such as the joint selection by a geologist and a historian of a fossil fish collected by the 19th century geologist Hugh Miller and his publication ‘The Old Red Sandstone’. Others have shown other ways of relating to objects, including the designer who has chosen some examples of wooden typefaces, an archaeologist whose choice was a tea-cup abandoned by an Arctic expedition and the father who chose a coffee pot.

“Not all have found a prose caption to be the only way of interpreting an object, with one artist displaying a painting alongside a Maori treasure box which was its inspiration and another creating a sound installation to explore a normally hidden aspect of an object, while other labels read more like short poems. The connections some objects are not immediately obvious, such as a postgraduate student who choose an Aberdeen-made cheese dish, a primary school class who chose a 17th century silver beaker, a local resident who chose a wood-working tool and an author who chose a prehistoric flint.

“The exhibition is therefore a contemporary version of a ‘cabinet of curiosities’, but instead of being open only to a privileged few or trying to tell a single story, this exhibition is the creation of a range of people with different perspectives. It hopes to challenge the idea of curiosity by exploring how objects can inspire wonder, imagination and personal meanings. As visitors look at objects from many times and places, they will come to understand more about themselves and their own culture as much as gaining an insight into the lives of other people.”

‘100 Curiosities’ will be open until the end of May.

The museum will be open free throughout the week (9.30am – 4.30pm), staying open late on Tuesdays to coincide with the well-established evening lecture programme and on Saturdays from 11am – 4pm.