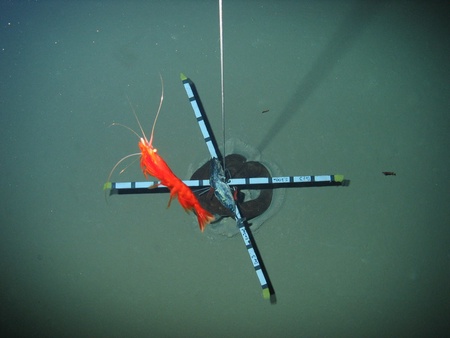 Aberdeen scientists have photographed for the first time fish and shrimps at Europe’s deepest point – 5111 metres or 3.2 miles deep below the surface of the Mediterranean Sea.

The University of Aberdeen scientists were part of a research cruise carrying out a survey for a KM3NeT* consortium which is preparing to place a neutrino telescope at the bottom of the Med.

The telescope will comprise a large array of sensors connected with a cable to computers on shore. They will detect flashes of light produced in the deep sea by high energy neutrinos - tiny particles travelling at close to the speed of light - from distant objects in the Universe such as gamma ray bursters, supernovae and colliding stars.

The University’s Oceanlab is part of a team studying deep sea life that might affect the working of the telescope. The team is also interested in plugging in mini observatories onto the telescope infrastructure to study marine life.

Thomas Linley, Oceanlab research assistant, was aboard the cruise and sent  a baited camera  down into the Oinousse Pit - Europe’s deepest point, south west of the Greek town of Pylos.

He said: “It took over two hours for the camera to sink to the bottom and it was pretty nerve wracking as I had built the equipment at Oceanlab. The camera should withstand depths of 6,000 m but it had never been tested at this depths. Waiting for it to surface again felt like a very long time.”

Mr Linley had 16 hours to wait before the camera was back on board.

“Until the camera came back I had no idea if we had captured anything but thankfully deep sea shrimp or Acanthephyra eximia arrived within the first few minutes and began to feed on the bait,” he said.

“About three hours later a fish was caught on film - the Mediterranean rat-tail or Coryphaenoides mediterraneus. We didn’t know it went to these depths and this was the first time this fish have been photographed at these depths.”

Most of the world’s deep seas are deep, dark and cold whereas the Med is deep, dark and warm. Food is scarce in the Mediterranean Sea and there are not many animals that can cope with such unusual conditions  - high pressure, warm temperature and little food. The fish are  much smaller than their Atlantic relatives but the shrimps really seem to thrive.  .

Mr Linley added: “I was hopeful that we would see something because after years of probing the deepest points of the world’s oceans, Oceanlab scientists have yet to discover a dark depth without life.

“These animals may be pushed to their limit at this depth, but they still persist. Finding and then photographing them extends the known maximum depth of this fish and proves that another one of the world’s deepest places harbours life.”