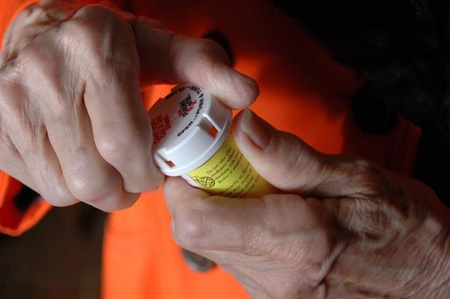 A major research project into the safety of long term pain relief for sufferers of arthritis has taken a significant step forward this week with the recruitment of its 4000th patient volunteer.

The SCOT study is designed to examine the effectiveness and safety of drugs commonly used to treat the pain of arthritis. Patients in the North east are being invited to join the study, which could benefit millions of arthritis sufferers around the world.

Professor David Reid of the Institute of Medical Sciences at the University of Aberdeen, and Professor John Webster, consultant physician with NHS Grampian, are running the SCOT study locally, and have successfully recruited just under 500 patients, with 42 GP practices taking part in the study around the Grampian area.

Professor Webster said: “The study is designed to reflect standard clinical practice as closely as possible, with minimal inconvenience to patients and their own doctors. Once a screening procedure has been undertaken, eligible patients may be randomised to one or other form of active therapy for their arthritis.

“Virtually all study consultations are conducted in local GP practices by a team of research nurses. So far in Grampian the response has been excellent and we hope to continue successful recruitment over the next year.”,

The group of drugs most commonly prescribed to treat the pain of arthritis; Non-Steroidal Anti-Inflammatory Drugs (NSAIDS) includes familiar names such as ibuprofen (Brufen®) and diclofenac (Voltarol®) which are commonly used to relieve joint pains. Often they do that job well, which is why they are so popular.

Millions of prescriptions are written in Scotland every year for NSAIDs, not counting all the ibuprofen sold 'over-the-counter' in pharmacies and shops. Despite this, like all drugs, NSAIDS can have side effects. These include irritation of the digestive system and effects on blood pressure and the heart.

In recent years a new group of NSAIDs has been developed called `Cox-2 inhibitors’. These Cox 2 inhibitors have been shown to be less harsh on the digestive system than the most popular existing NSAIDs, leading to fewer stomach ulcers and bleeding. However, early studies on one of these new drugs suggested an increase in the risk of raised blood pressure and heart problems, but the balance between benefits and possible risks is not known.

The aim of the SCOT study is to find out if celecoxib - the most widely prescribed of the Cox-2 inhibitors - is better, worse or just the same as the other available NSAIDs in terms of cardiovascular and digestive system safety.

The SCOT study, led by Professor Tom MacDonald, of the Medicines Monitoring Unit at The University of Dundee, is supported by six other Universities across Scotland, England, Denmark and Holland, making it one of the biggest ever studies run by a Scottish university.

“This information will be of great value to everyone who needs to take these drugs on a regular basis, which is millions of people around the world. The findings will allow doctors and people with arthritis to make the best choice, not just for their joint pains but also for their general health,”said Professor Tom MacDonald.

Recruitment of volunteers and GP practices to the study is still taking place, so if you are interested in taking part in the SCOT study, speak to your GP directly to ask if they are taking part, or check the website for details (http://www.scottrial.co.uk/) or email info@scottrial.co.uk  or Telephone : +44 (0) 1224 554499