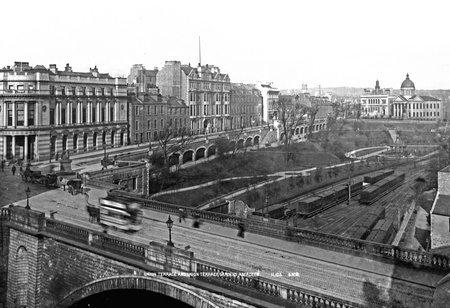 The launch of a new online system of digitally enhanced photographs provides new insight into life in Scotland, the UK and beyond at the end of the 19th century.

The University of Aberdeen has made available online more than 35,000 high resolution digital versions of images originally taken between 1853 and 1908 by the Aberdeen photographic firm George Washington Wilson & Co*.

The images, taken throughout Scotland the UK and beyond, allow the examination of details previously hidden from the naked eye.

Users of the system can simply type the name of the town, city or landmark they are looking for at www.abdn.ac.uk/historic/gww/index.htm and can then ‘zoom in’ on the photographs to reveal shop names, the writing on posters, the clothing worn by those captured in the image and a many other details without losing the quality of the image.

If you want to know the prizes on offer at the Aberdeen Agricultural Show or the goods on Sale in Edinburgh’s Canongate, you will find the answers within the photographs of the collection.

This significant resource has great potential for research by social and cultural historians as well as by the general public.

Born in the North East of Scotland, George Washington Wilson (1823-93), became established in Aberdeen in the 1850s as an 'artist and photographer'. Wilson took his camera all over Britain and the colonial townships of South Africa and Australia, as well as the western Mediterranean.

The collection was first digitised in the mid-1990s, but advances in web delivery since then have allowed these high resolution images to be made available online for the first time.

University of Aberdeen PhD student Cameron McEwan, who is researching the work of Wilson for his doctorate, said the collection provided a unique insight into life at the end of the 19th century.

"This new technology allows for much greater focus than ever before in the images produced by George Washington Wilson and his colleagues,” he added.

“Details previously unseen are now being made visible through this new process and the quality and clarity is remarkable.

“Wilson was a leader in his field – creating the 19th century’s version of the worldwide web with his images capturing life across the globe – yet his legacy in Aberdeen is not as well known as it should be.

“As Wilson was at the forefront of technology in his day, it seems only fitting that the most up-to-date tools of the twenty-first century are utilised to assess, re-assess and, above all, admire this great man's work.”

The new online George Washington Wilson collection, is part of an ongoing enhancement of access to the University of Aberdeen Library’s extensive digital image collection.

The database will soon be enriched by the addition of the Aberdeen Harbour Board Photographic Collection, which contains about 6,000 images from the 1880s to the 1930s. These are mainly images of the harbour and surrounding area, but include some of Aberdeen city and further afield.  Aberdeen Harbour Board has generously provided sponsorship for the new Photographic Archive Room, within the Special Collections Centre of the University’s new library.

In addition to viewing the collection on line, high quality photographic prints of any image in the online archive can be purchased through the website – these can be supplied in black and white or sepia and can be mounted or framed.

The George Washington Wilson online archive can be viewed at www.abdn.ac.uk/historic/gww/index.htm.

*The stock of G. W. Wilson & Co. was auctioned off in 1908. The plates passed into the possession of Fred Hardie, and then to the photographer, Archibald J. B. Strachan, who, on moving to new and smaller business premises in 1954, offered them to the University Library. The University is pleased to acknowledge the foresight and beneficence of Mr Strachan.