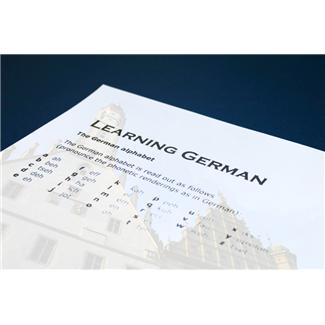 The winners of an initiative to promote German language learning to school pupils in the north-east will be announced at a ceremony at the University of Aberdeen on Wednesday (March 30).

The German Consulate General and KCA DEUTAG, the international drilling contractor, together with the Goethe Institute and the University of Aberdeen, have come together for the second year running to organise a German language competition boasting a week’s work experience at KCA DEUTAG’s offices in Bad Bentheim, Germany, as first prize.

Participating Aberdeen City and Aberdeenshire schools have each selected two pupils to take part in the competition based upon the results of a questionnaire comprising both English and German sections.

The selected applicants will compete at a finale which will be held at KCA DEUTAG on Wednesday (March 30). The winners will be announced at a prize-giving ceremony at the University of Aberdeen that evening, in the presence of a selection of prominent guests from the education sector and local community, including Aberdeenshire Provost Bill Howatson.

The three winners will spend a week in Germany on work experience at KCA DEUTAG’s offices in Bad Bentheim. They will gain a unique insight into the workings of the company and visit an operational oil rig. During their trip, the pupils will stay with German families in order to learn more about German culture and traditions and will spend a day at a German school.

The competition aims to make young people in the local area aware of the value of languages and of cultural diversity, and in doing so to boost uptake of German language-learning in secondary schools. The competition provides an insight into real, everyday situations in which use of a foreign language can promote understanding and performance in the workplace, a lesson of increasing value in an ever-more international business environment.

Professor Gordon Burgess, Head of Aberdeen University's German Department,  in the School of Language and Literature,  said: “We are delighted to be supporting the second competition of this kind in Scotland for S4/5 pupils, and hosting the prize-giving ceremony. It demonstrates the University's commitment to modern languages, and to supporting foreign language learning in schools in Aberdeen City and Shire.

“As shown by this competition, German is the major foreign language for business, as well as culture (and football). Thanks to our strong links with the German Consulate in Edinburgh and the Goethe Institute in Glasgow,  as well as with the Austrian and German Academic Exchange Services,  we are well placed to ensure that our graduates have the knowledge and skills to equip them for a future career using their German, whether in the UK or abroad.”

Holger Temmen, KCA DEUTAG’s CEO, said: “This competition is an opportunity for us at KCA DEUTAG to promote to others in the local community some of the benefits we derive from our increasingly international and multi-cultural approach to business. Our employees are one of our main strengths due to their flexibility and professionalism, and it is our conviction that the ability to speak foreign languages promotes insight and willingness to work together to find the solutions our clients expect from us.

“I unhesitatingly recommend the study of foreign languages to young people looking to their future in the workplace and am delighted with the enthusiasm of all of the applicants hoping to take this opportunity.”

The German Consul General, Wolfgang Mössinger, expressed his delight on behalf of all German agencies involved that KCA DEUTAG has once again provided such a strong commitment to this fantastic project. “The German Consulate General and the Goethe Institute do everything in their power to support German language teaching in Scottish schools. It is a real asset to have the support and the sponsorship of a company like KCA DEUTAG. With the backing of Aberdeen City and Aberdeenshire Councils this project represents a unique opportunity for young people in the North East to gain invaluable language and engineering experience at a young age.”