New study sheds light on cause of choosing right over left.
14 March 2011 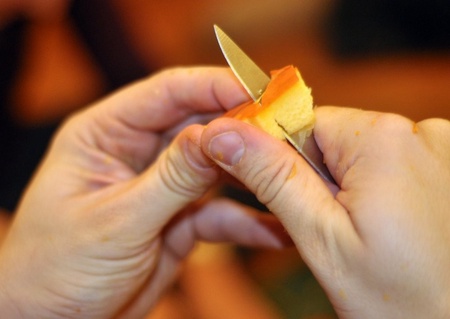 Over 90% of us prefer to use our right hand for most skilled tasks. A new study from the University of Aberdeen suggests why.

For decades, researchers have been trying to understand why this asymmetry exists. Why, with our two cerebral hemispheres and motor cortices, are we not equally skilled with both hands?

A study from the University of Aberdeen, published in the April 2011 issue of Elsevier’s Cortex, suggests that the explanation may stem from actions that require us to use both hands at the same time, which may bias right-handers toward choosing their right hands.

Gavin Buckingham, now a postdoctoral researcher at the Centre for Brain and Mind at the University of Western Ontario in Canada, and his PhD supervisor Dr David Carey of the University of Aberdeen’s School of Psychology, asked left- and right-handed participants to reach first toward a pair of targets with both hands at the same time and, immediately afterwards, toward a new single target with only their closest hand.

Just before they began the reach,subjects were given a short vibratory pulse on one of their hands, giving them a clue about where the new target would appear, and hence which hand should perform this second portion of the reach.

On a small proportion of trials, the pulse was given to the wrong hand, which meant that subjects had to restrain the reach with this incorrectly-cued hand in order to make the reach with the correct hand.

The right-handed subjects had far greater trouble dealing with this incorrect cue when it was given to their right hands, making more mistakes and taking longer to successfully inhibit the reaches, almost as if the right hand was already pre-selected to carry on during the bimanual reach. The left-handed subjects showed no such asymmetries, suggesting that they are less inherently biased to select one hand over the other.

These findings build on a series of studies from the same researchers which have indicated that right-handers have their attention largely directed at their right hands during bimanual tasks. “One explanation for these data is that hand choice is related to hemispheric specialisation for speech and language” says Dr Carey. “Many left-handed people have “right-handed” brains, which weakens the typical bias towards choosing their dominant left hand.”

The article is “Asymmetries in motor attention during a cued bimanual reaching task: Left and right handers compared” by Gavin Buckingham, Julie C. Main, David P. Carey, and appears in Cortex, Volume 47, Issue 4 (April 2011), published by Elsevier in Italy. Full text of the article featured above is available to members of the media upon request. Please contact the Elsevier press office, newsroom@elsevier.com. To schedule an interview, contact Dr. Gavin Buckingham gbucking@uwo.ca.

Cortex is an international journal devoted to the study of cognition and of the relationship between the nervous system and mental processes, particularly as these are reflected in the behaviour of patients with acquired brain lesions, normal volunteers, children with typical and atypical development, and in the activation of brain regions and systems as recorded by functional neuroimaging techniques. It was founded in 1964 by Ennio De Renzi. The Editor in-chief of Cortex is Sergio Della Sala, Professor of Human Cognitive Neuroscience at the University of Edinburgh. Fax: 0131 6513230, e-mail cortex@ed.ac.uk. Cortex is available online at  http://www.sciencedirect.com/science/journal/00109452

Elsevier is a world-leading publisher of scientific, technical and medical information products and services. The company works in partnership with the global science and health communities to publish more than 2,000 journals, including The Lancetand Cell, and close to 20,000 book titles, including major reference works from Mosby and Saunders. Elsevier’s online solutions include ScienceDirect, Scopus, Reaxys, MD Consult and Nursing Consult  which enhance the productivity of science and health professionals, and the SciVal suite and MEDai’s Pinpoint Review which help research and health care institutions deliver better outcomes more cost-effectively.