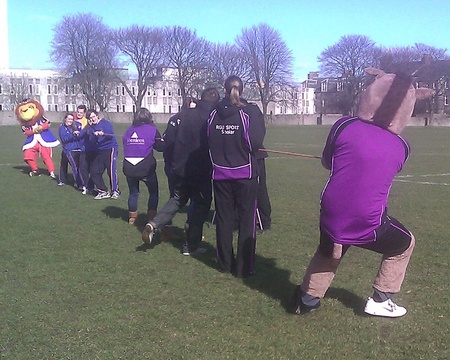 Student sport teams from the University of Aberdeen and Robert Gordon University and are preparing to battle it out once again for this year’s Granite City Challenge, which will take place this Wednesday 16 March.

Now in its 14th year, the challenge sees over 700 students compete annually on the field, court, track and pool, and all in the name of healthy competition.

A total of 34 events will take place throughout the day across Aberdeen city in venues including RGU: SPORT, Curl Aberdeen, King’s College Playing Fields, Pitfichie Forest and Aberdeen Sports Village.

The 2010 Challenge was an extremely closely fought competition with the University of Aberdeen ultimately claiming the title with 15 wins to 14.

Drew Leitch, President of Sports at the University of Aberdeen said: "As this year’s host I am very excited to have all these sports happening on Campus just on one day."

Nearly all Sports Clubs are competing against each other.

"The rivalry between Aberdeen and RGU is massive so all teams will be desperate to win and hopefully retain our hold on the trophy.

"I know that that I can hardly wait until the start whistle, I know my Captains will be feeling the same. It will certainly be a superb day to be a spectator, we hope as many people as possible can make it to support our Sports Club members."

Nicola Scott, Vice President of Sports at Robert Gordon University added: "Granite City Challenge is one of the biggest sporting events the calendar for both RGU and Aberdeen University.

"The event is guaranteed to showcase great sporting talent. This year's event, hosted by Aberdeen University, will see 21 RGU teams take up battle on the other side of the city at King’s and Aberdeen Sports Village.

"Meanwhile five teams will be competing on home turf at RGU: SPORT in their best attempts to bring home a RGU victory. With both RGU and Aberdeen teams competing well throughout 2010/11 I am interested and excited to see who comes out on top on the 16th."