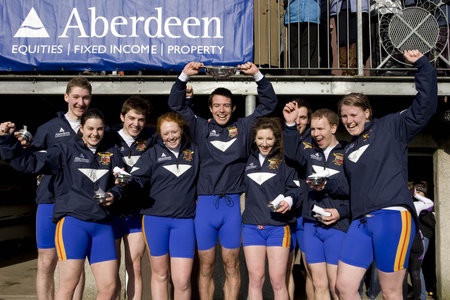 A legion of fans lined the banks of the River Dee at the weekend (Saturday March 5) to cheer as the University of Aberdeen rowed its way to victory in a ‘Survival of the Fittest’, the Aberdeen Asset Management Universities’ Boat Race.

Aberdeen University triumphed over their rivals, Robert Gordon University (RGU) for the 14th time in the 16 year history of the race. The winning team completed the 3.5km race from the Bridge of Dee to Aberdeen Boat Club in Torry in 8 minutes and 22 seconds.

The build up to the big race started at 12.35am with the Universities’ Second Crew Boat Race which was won by Aberdeen University with a time of 2 minutes and 38 seconds. The Alumni boat race followed and was won by three lengths in a time of 8 minutes 13 seconds by RGU. Local media celebrities from the Press and Journal and STV, added to the day’s entertainment by racing 300m in coxed ‘tub’ pairs for the Media Challenge Cup. Both crews battled it out and the Press and Journal came out on top as the winners with a time of 1 minute and 16 seconds.

Currently in his fourth year studying Geoscience at Aberdeen University, Adam Downie, president of Aberdeen University boat club, says, “Taking home the 2011 Aberdeen Asset Management Universities’ Boat Race trophy again this year was a great way to reward the hard work and focus of our team.  We’ve been training hard for so many months now that it meant the world to us to win and keeping our focus on this really helped us succeed, when it came to the crunch on race day.

“The Robert Gordon University were worthy opponents but we had really bonded together as a team, so I knew it would take a lot to break us. It was great to see so many people come down to cheer us and we couldn’t have done it with out their support.”

Hugh Little, head of acquisitions for Aberdeen Asset Management, says, “The boat race event was once again a huge success with a fantastic spectator turnout, and all of the participants took part with a great deal of enthusiasm. Congratulations to Aberdeen University, and their opponents at Robert Gordon University, both of whom are a credit to the area’s athletic talent. The success of this year’s event is a good marker for the next two years of the race which Aberdeen Asset Management has committed to continuing sponsoring. A great day was had by all and I would like to thank everyone who supported the day for making it such great sporting event.”

Aberdeen Asset Management is an independently operated company, which has been listed on the London Stock Exchange since 1991 and is currently a FTSE-250 (mid-cap) company with a market cap of £2.3bn.

Excluding its smaller private equity offices in the UK, the group has 30 offices located in 23 countries around the globe with its main investment management centres in Edinburgh, London, Philadelphia, Singapore and Sydney, and its property operation is headquartered in Stockholm.

Aberdeen Boat Club (ABC)is one of the oldest rowing clubs in the UK. Founded in 1865 on the River Dee, ABC is now one of Scotland’s largest rowing centres. Competitively, members have enjoyed success at both national and international levels as well as generally having the strongest presence at domestic events. In 2002, Aberdeen Boat Club became the first Scottish club to win at Henley Royal Regatta.

The club welcomes rowers in the Aberdeen area with a well-organised training structure for complete beginners. For more information about Aberdeen Boat Club, visit: ww.abc-dee.co.uk