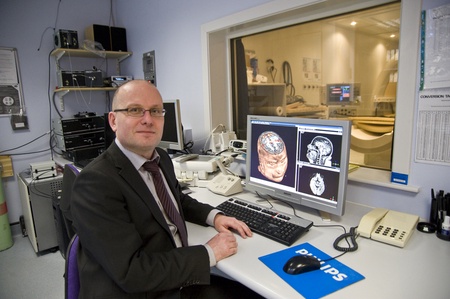 Pioneering brain imaging techniques are being developed by University of Aberdeen scientists to find out more about patients in a coma.

The new Aberdeen Coma Science Group - the first of its kind in Scotland - will develop groundbreaking medical imaging methods for understanding the brain function of patients in a coma as well as those in a persistent vegetative state* and sufferers of ‘locked in’ syndrome*.

Using a scanning technique called functional MRI - fMRI - the research will provide greater insights into the brain and whether a patient is actually aware. It will also help guide treatment and provide information for clinicians and relatives about the possible prognosis of the patient.

Patients from the north east of Scotland will shortly be recruited onto the research which will involve NHS Grampian clinicians from intensive care and rehabilitation therapy as well as University scientists from neuroscience, psychology, computer science, physics and mathematics.

Professor Christian Schwarzbauer, Chair in Neuroimaging at the University of Aberdeen, is leading the work which will involve patients being given fMRI scans while simultaneously exposed to a range of stimuli such as pictures, sounds, smell and touch.

Part of the work will build on a technique used by researchers at the Universities of Cambridge and Liege where fMRI was used on a 23-year-old woman in a persistent vegetative state following a severe road accident. The patient was asked to imagine playing a game of tennis, which she was able to do, as her brain displayed similar activation patterns to those seen in healthy people. This and other tests showed that the woman was aware.

The research will also take forward the findings of a study conducted at the Max Planck Institute for Human Cognitive and Brain Sciences in Germany and led by Professor Schwarzbauer who moved to Aberdeen from Cambridge. This study involved healthy people being given an fMRI scan and anaesthetised while they listened to researchers saying sentences while scientists watched how their brain responded.

While the brains of the volunteers appeared unresponsive when they were fully sedated, researchers also discovered via the fMRI scans that the communication network in the brain was still connecting and ‘talking’ just as it did when the volunteers were awake. This showed that the brain was still functioning even though it appeared to be unresponsive and not activating to the external stimuli.

Professor Schwarzbauer said: “Thanks to advances in medical care our chances of surviving a severe accident are much higher than they used to be. Doctors can save the lives of many patients who suffer brain injury, but, if the injury is severe, the patient may not regain consciousness and slip into a coma.

“Some will regain consciousness but others will remain in a so-called vegetative state. With their eyes open and possibly even wandering, these patients appear to be awake but show no signs of awareness of themselves or their environment.

“The accurate diagnosis of disorders of consciousness such as coma and persistent vegetative state is a major challenge for clinicians. Standard neurological tests rely on a behavioural assessment which is extremely difficult for this group of patients and this has resulted in a high rate of misdiagnosis of up to 40%.

“There is a possibility that patients who do not show any brain activation may not be giving a response because their hearing has been impaired because of the accident. Therefore it is important to extend the range of tests to include other senses such as vision or touch.

“Our aim is to develop new diagnostic methods for these patients because knowing to what extent a patient is aware will not only be of great importance to doctors, carers and therapists but also to the patient’s relatives.”

Professor Schwarzbauer hopes his team will be in a position to scan the first patient at the beginning of April. *** Please note at this stage researchers will only scan patients from the north east of Scotland.

He added: “Aberdeen has been an internationally recognised centre of excellence for medical imaging for many years and that is why it is so important that the research begins here.

“At this stage our research will just cover patients in the north east of Scotland, but depending on the results of our research, our methods could be rolled out to centres elsewhere.”

The coma research is a project of SINAPSE– the Scottish imaging network.

·         Professor Schwarzbauer will be discussing his research together with Dr Helen Gooday and Dr Stephen Scott from Aberdeen Royal Infirmary at Café Med – Coma and Consciousness - a free public talk organised by the University of Aberdeen and taking place at the Suttie Centre Café, Foresterhill Health Campus, Aberdeen on Monday, March 14 at 6pm.

Professor Christian Schwarzbauer is available for interviews and photographs – photo opportunities will take place in the Lillian Sutton Building at Foresterhill, Aberdeen between 12 noon and 1pm. To arrange, please contact Jennifer Phillips on + 44 (0)1224 273174. Photos can also be sent to the media of Professor Schwarzbauer.

** Please note there are no patient case studies at this stage.

*About coma, persistent vegetative state and locked in syndrome

A coma is when a patient is in a state of deep unconsciousness and is unable to react to his or her surroundings. There can be a variety of causes such as a road accident, illness or severe blow to the head and the condition rarely lasts longer than five weeks.

Some patients will regain consciousness and make a quick recovery while others will remain in a so-called vegetative state. Patients appear to be awake but show no signs of awareness of themselves or their environment.

Locked in syndrome is a condition where the patient is awake and aware but cannot move or communicate except through eye movements or blinking. A recently published French survey suggested that most suffers were happy despite their condition.

Patients with brain injury are assessed on their level of consciousness via a basic behavioural bedside test called the Glasgow Coma Scale which scores their visual ability, verbal responsiveness and motors skills.