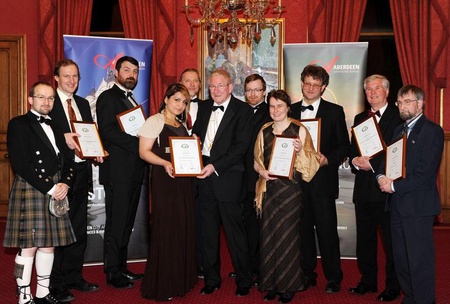 Academics and business leaders who helped to bring conference business worth £10million to the North-east’s economy have been recognised for their contribution at Aberdeen Convention Bureau’s annual Ambassador Awards dinner.

Lord Provost Peter Stephen presented awards to 22 ambassadors who secured conferences for 2010 or for the next few years, including a number from the University of Aberdeen, while Carol Benzie from Aberdeen Airport was the guest speaker.

Around 90 guests attended the dinner at the Town and County Hall in the Town House last week (Wednesday, January 19).

Business tourism is crucial to the Scottish economy, with an economic benefit of £1billion a year, and association conferences are vital to sustain this level of growth.

Through its ambassador programme, the bureau works closely with the academic and corporate communities throughout the local area, and around half the £20million of business secured in 2010 came through the team of ambassadors.

Many of those appointed as conference ambassadors have a high profile within specialist fields such as oil and gas, health, food research, science and environmental research.

Jacky Selway, manager of Aberdeen Convention Bureau, said: “The Ambassadors’ awards dinner is all about recognising the efforts of all our ambassadors who have worked hard to influence their peers and bring millions of pounds worth of conference business to the North-east, while celebrating Aberdeen as a fantastic destination.

“Over the past 12 months, Aberdeen Convention Bureau has welcomed a number of different conferences to the city, generating £10million for the local economy, with a further £10million worth of business secured for the next few years.

“This amounts to around 22,000 delegates, who we hope will all leave Aberdeen City and Shire spreading the word about all we have to offer.

“Aberdeen is now in an extremely strong position and can hold its own against other global destinations, with increased bedrooms, new hotels and conference facilities, major developments such as the Trump golf resort and improved links from Aberdeen Airport.”

Ambassadors work to promote Aberdeen City and Shire as an attractive conference destination by attracting key meetings and seminars to the area, focusing attention on the region and encouraging local economic growth.

In return, the scheme allows ambassadors to showcase their research and raise their own profile within their area of specialism, giving their subject matter a wider audience through Aberdeen Convention Bureau’s support and promotion.

Once a bid has been successful, the Convention Bureau can arrange accommodation for delegates and assist with arranging social events programmes.

Certificates and prizes were awarded to 22 Ambassadors who confirmed business in 2010:

Carol Benzie, Head of Business Performance at BAA Aberdeen, told guests about developments at the airport, including plans to extend the runway and increased connectivity to the US, with new flights to New York via Dublin.

The evening’s entertainment was provided by The Three Tenors and guests were piped into the Town House by Jim Stevenson.

For more information on Aberdeen Convention Bureau and the Ambassador programme, call 01224 288815 or visit http://www.aberdeenconferences.com/